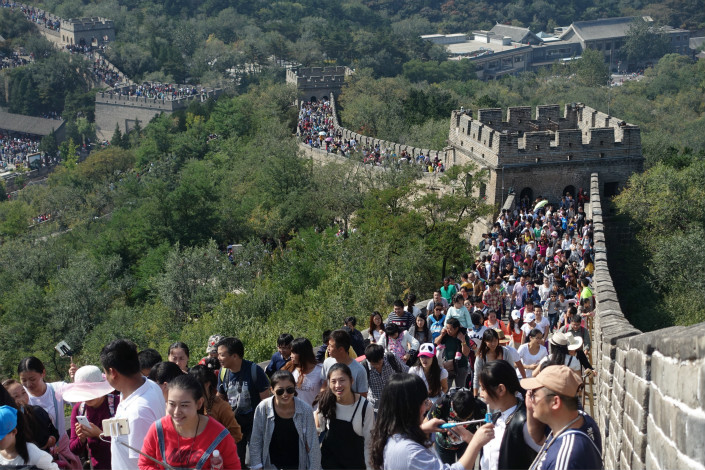 The China National Tourism Administration said that reservations on the accommodations website Airbnb more than doubled over the National Week holiday from last year. Above, tourists visit the popular Badaling section of the Great Wall in Beijing on Wednesday. Photo: Visual China

China saw big increases in both tourism and box-office sales during the country’s early-October holidays, with numbers for both rising significantly from the same period last year.

China received 705 million visitors during the eight-day holiday — which ended Sunday and included both National Day and the Mid-Autumn Festival.

Tourist numbers for the first seven days were up 11.9% from a year earlier, when the holiday lasted only a week in total, according to the China National Tourism Administration (CNTA).

The CNTA estimated that Chinese traveling abroad amounted to more than 6 million, with the most popular destinations including Russia, Thailand, Vietnam, Singapore and Malaysia. Only a tenth of those travelers went via group tours, the CNTA added.

Movie ticket sales totaled 2.6 billion yuan ($391 million) over the eight-day period, with the first seven days 148% higher than the same period last year. This marks a strong recovery from 2016, when box office numbers dropped for the first time in a decade, according to statistics from Maoyan.com, a movie-industry news portal.

The best-performing films were the Chinese comedy “Never Say Die”; the thriller “The Foreigner,” starring Jackie Chan and Pierce Brosnan; and the Hong Kong action flick “Chasing the Dragon.”

Along with their expanding tastes in movies, Chinese traveling inside China are expressing a wider array of interests — increasingly going beyond simply visiting tourist attractions, and preferring to dine out, exercise, and even engage in specialized activities such as farming, the CNTA said.

Data also indicate that Chinese are participating in the rapidly growing sharing economy as well, especially in terms of lodging. During the eight-day holiday, reservations made on accommodations website Airbnb more than doubled from a year earlier, the CNTA said.

Traveling by tour group — in which schedules, housing and transport are all set by a travel company — is declining. Nearly 1.4 million Chinese went on such groups last year, while the number fell by half this year, according to the CNTA.

Tourists seemed especially keen on traveling independently to France, where 43% of Chinese went outside a tour group. The CNTA also cited data from French authorities noting that fewer Chinese seemed to be shipping for luxury goods, while more opted to visit villages and museums.