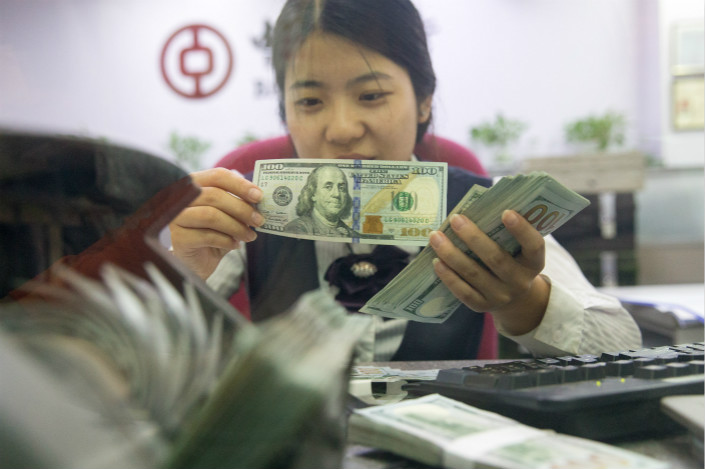 "The basis for foreign exchange reserves to increase steadily has become more consolidated," an analyst said, suggesting that the growth may indicate greater domestic demand for the yuan and a stemming of capital outflow. Photo: Visual China

A total of $16.98 billion was added last month to the country’s stockpile of foreign exchange, the world’s largest, according to data from People’s Bank of China (PBOC), the central bank. The increase in September was more than August’s $10.81 billion gain and the fourth-biggest monthly addition this year.

Wen Bin, an analyst with China Minsheng Bank, said that the monthly increase suggested that demand for the yuan in China may have risen and that the capital outflow pressure may have eased further last month, offsetting the valuation loss in the country’s foreign exchange reserves due to the depreciation of major currencies against the dollar.

“The basis for foreign exchange reserves to increase steadily has become more consolidated,” he said in a note.

Banks in China sold $3.8 billion more in foreign exchange than they bought last month, latest official data showed. Although that was the 26th straight month of net sales, the figure was down from $15.5 billion in July and $9.5 billion a year earlier. Smaller net sales of foreign exchange by banks indicate a recovery in demand for yuan among Chinese individuals and companies. Wen expected the figure for September to have further shrunk.

In January, the country’s foreign exchange stockpile had fallen for seven consecutive months, dipping below what analysts widely believe was the central bank’s psychological comfort level of $3 trillion. It was the first time in nearly six years that it dropped below the mark.

But the reserves have gradually recovered since February due to the government’s ongoing crackdown on capital flight, as well as stronger-than-expected economic growth in China, which helped ease fears of a weakening yuan. The yuan has appreciated around 5% against the dollar this year.

Chinese authorities have taken a series of measures since the fourth quarter of 2016 to halt capital outflows, including curbing domestic companies’ investments overseas and enhancing scrutiny of individual requests for foreign currency.