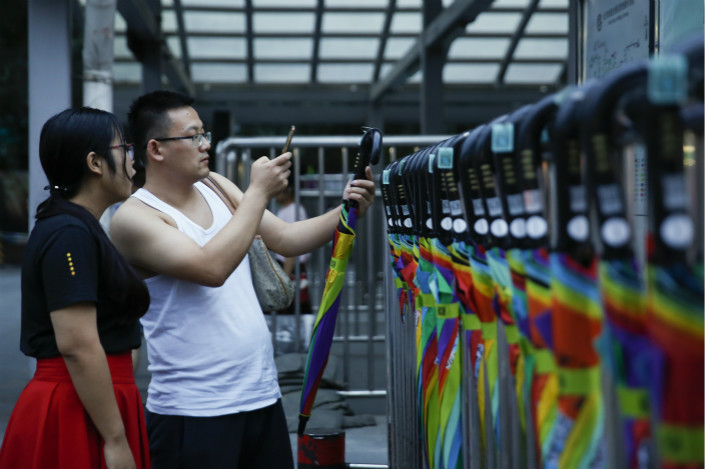 Despite the firm's chosen sharing economy niche suffering from product theft issues, Yousan founder Liu Qing told the media that the company hopes "that in the process of building the credit cities of the future, Yousan can promote its own role.” Photo: Visual China

A shared-economy startup trying to make it as an umbrella-lending specialist has found rainmakers in two leading corporate citizens in the Yangzte River Delta.

Yousan, whose name means “Umbrellas Here,” said Shanghai-based outdoor advertising giant Focus Media Information Technology Co. Ltd. and online travel specialist Tongcheng Travel E-Commerce Co., Ltd., based in the nearby city of Suzhou, are among the backers in its new 30 million yuan ($4.5 million) angel funding round. While modest by most standards, the figure is still sizable for a niche group that has been plagued by theft of its products.

The company recently rolled out its shared umbrella concept in Shanghai and Suzhou, as well as the nearby city of Nanjing. It’s hoping its specially designed racks that don’t require electricity, along with connections from its big new backers, can help it succeed where others have failed, according to a report in CBN, one of Shanghai’s leading business publications.

“We hope that through the efforts of our team we can become the first brand that brings convenience to consumers with shared umbrellas in rain and in sun,” founder Liu Qing told CBN, referring to the common Chinese practice of using umbrellas not only during rain but also to block out the sun. “We also hope that in the process of building the credit cities of the future, Yousan can promote its own role.”

Chinese entrepreneurs have been taking the shared economy concept beyond the usual shared rides, homes and offices seen in the West, in search of the next big thing. Some of those include shared basketballs, battery chargers and even sex dolls, as well as umbrellas for people who get caught out in the rain. But many of those have failed for various reasons, including a recent shared sex doll concept that got yanked after creating a stir on the internet and also getting fined for an illegal promotion.

One of Yousan’s biggest challenges could be theft and damage of its products, based on experience from similar companies. One such wannabe in the eastern Chinese city of Nanchang reportedly suffered a major setback when people helped themselves to the 30,000 umbrellas it placed in racks for use as temporary loaners without ever returning the products.

Despite that, the company vowed to press on by putting out new umbrellas, and hoped that previous borrowers would someday return the appropriated ones.

Yousan is hoping it won’t suffer a similar fate by asking for modest 29 yuan deposits from users and charging small fees of just 1 yuan for up to 12 hours and free use for the first 15 minutes.