Umbrella-Sharing Service Washed Out by Thieves 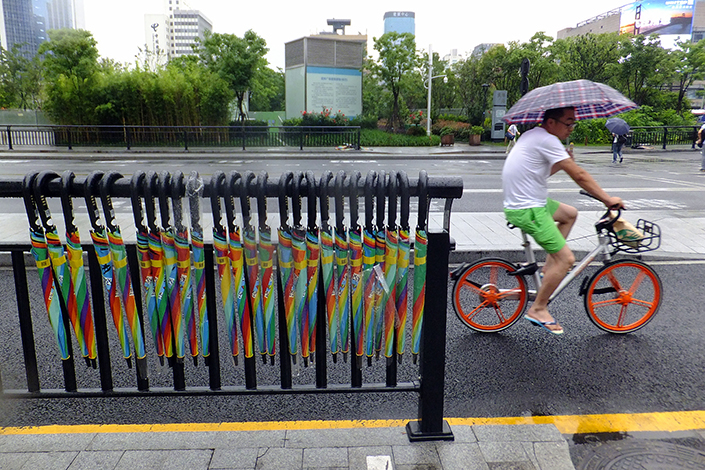 A Nanchang company that lends umbrellas to users for a small fee has seen 30,000 of its umbrellas disappear after just one month. Photo: Visual China

Bandits have rained on the parade of an entrepreneurial company hoping to cash in on China’s shared-economy craze with an umbrella-lending service.

Half a month after its launch, about 30,000 shared umbrellas targeting consumers who get stuck in the rain have disappeared after being placed outdoors by a service provider in Nanchang, the capital of eastern China’s Jiangxi province, according to the Jiangnan City Daily.

Despite the rampant long-term “borrowing,” the company said it intends to keep the business going for now.

“They all disappeared within a few days of being put out,” a shop merchant near one area where umbrellas were placed told the newspaper. “They were all taken home by people.”

Such thievery is becoming a major headache for the wave of shared-economy companies springing up across China, where entrepreneurs are setting up services offering items as diverse as umbrellas and basketballs, bicycles and even traditional cars.

One of those companies, shared-bike operator 3Vbike, went belly up in the last week, as its owner blamed theft as the main reason for his decision.  Founder Wu Shenghua said he forked out 600,000 yuan ($88,200) of his own money for 1,000 bikes that he placed in four different cities, only to see many stolen or hidden by users. Another bike-sharing service called Wukong had gone bust just a week earlier, citing similar problems.

But a person who answered the phone for the Nanchang service put a sunny face on the disappearance of all its umbrellas, saying it intended all along for people to take and keep them for extended periods. The service officially requires a deposit of 19 yuan, even though the average cost of an umbrella is more than four times that much, at around 90 yuan, the newspaper reported.

The umbrellas’ high cost is due to the lock that each of the service’s umbrellas has. Users scan a bar code on each umbrella to get a combination that opens the lock and allows for the umbrella’s use. Users are then charged 0.5 yuan per half-hour of use.

“This is exactly what we wanted. Hiding the umbrellas for personal use was our original intent,” said a man named Zhao Shuping who answered the phone at the service provider. “There will always come a time when people will forget the code to unlock the umbrella, or when the new feeling will lose its freshness and the person may put it back, which will put it back into circulation on the streets.”

He added that the service hasn’t given up by any means, and plans to distribute another 5,000 umbrellas in Nanchang this month.