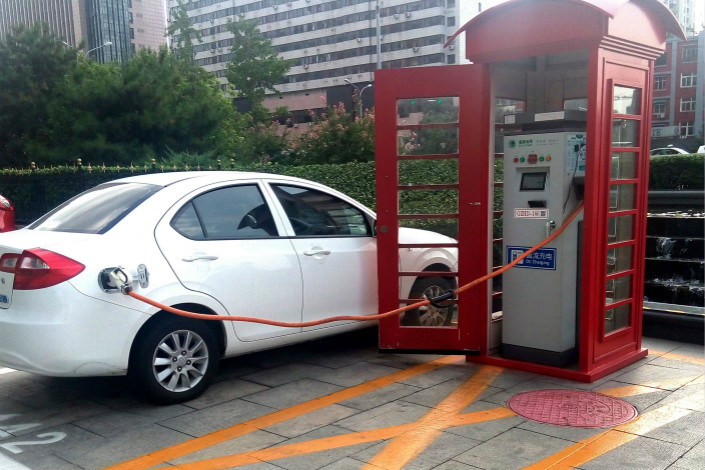 Auditing firm KPMG said that artificial intelligence and auto technology stood out as key sectors that attracted investment on the Chinese mainland in the third quarter. Above, an electric car is charged in Beijing on Aug. 17. Photo: Visual China

Companies on the Chinese mainland were recipients of half of the world’s 10 largest venture-capital financings in the third quarter, auditing firm KPMG said.

Venture-capital activity was “robust” in the third quarter of this year, KPMG’s quarterly report said, with companies on the Chinese mainland attracting a total of $10.2 billion in venture capital investment, down slightly from $10.7 billion in the second quarter.

Some of the deals made in the third quarter were “mega-sized,” according to the KPMG report released Wednesday. Chinese news aggregator Jinri Toutiao raised $2 billion in August, just days before the electric-vehicle unit of automaker Beijing Automotive Group raised 11.1 billion yuan ($1.69 billion) in its Series B round.

Artificial intelligence and auto technology stood out as key sectors that attracted investment, KPMG found. Facial recognition in technology in particular has attracted investment as a possible way to monetize artificial intelligence. Beijing-based SenseTime, a startup that develops face recognition for payment and picture analysis applications, raised $410 million in July, which pushed its valuation to over 10 billion yuan.

Venture capital deals involving mainland investors also made a big splash outside of China in the third quarter, KPMG said, with Chinese investors continuing to look abroad for opportunities.

The number of deals globally dropped to 2,672 in the third quarter, KPMG said, but quarterly total investment was the fourth highest since 2010 at $39.4 billion. The U.S. came second behind China on the global top 10 list, accounting for three of the quarter’s largest financings.