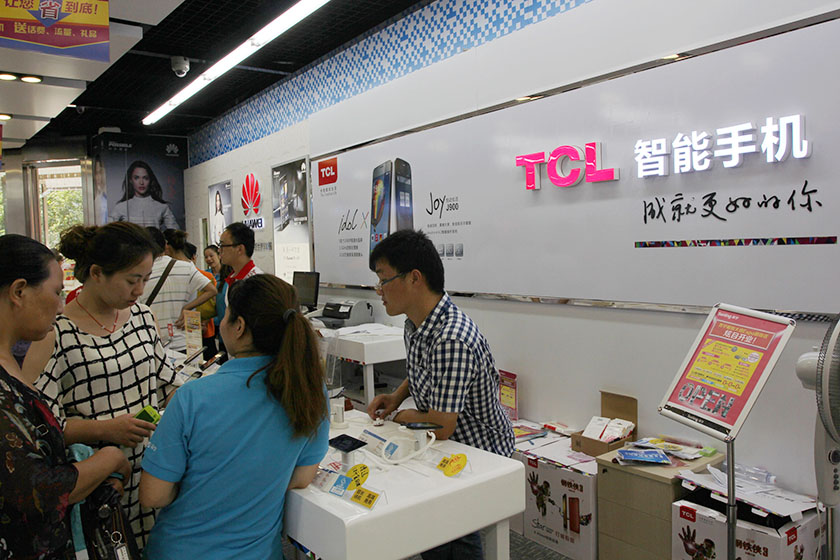 TCL Chairman Li Dongsheng said that smartphones are a cruicial part of the firm's broader interests, saying that “even though the business is losing money, we are constantly looking for a balance, and thus the communications business is something we can’t give up.” Photo: Visual China

TCL Corp. will sell 49% of its smartphone unit to three strategic investors for HK$490 million ($62.7 million), a year after one of China’s oldest electronics specialists signed a landmark deal to make phones using the storied but faded BlackBerry name.

The latest deal comes about a year after TCL privatized its smartphone-making division, TCL Communication Technology Holdings Ltd., from the Hong Kong stock exchange. The unit’s latest valuation of about HK$1 billion from the new stake sale compares with about HK$7 billion at the time of the privatization, showing just how much the division is suffering in the cutthroat smartphone space.

The latest stake sale was disclosed in a stock exchange filing late on Monday. It will see the 49% of TCL’s communications division sold to Unigroup, a telecoms specialist connected to the prestigious Tsinghua University, as well as Vivid Victory Developments Ltd. and an investment company based in southwest China’s Yunnan province.

Unigroup and the Yunnan investor will both bring their telecoms expertise to the unit, while Vivid Victory will bring management expertise. The move shows that TCL, which makes phones under the BlackBerry, Alcatel and its own brand names, has no intention of abandoning the mobile communications business, said Chairman Li Dongsheng. He added that such mobile devices are a vital part of TCL’s broader business, which includes its status as one of China’s leading TV brands.

“Right now smartphones and smart TVs have many similar functions. Many of their applications are also similar,” Li told Caixin in an interview. “Even though the business is losing money, we are constantly looking for a balance, and thus the communications business is something we can’t give up.”

Founded in 1999, TCL’s communications division was one of China’s earliest cellphone players. But despite its earlier successes, that part of the business has suffered in recent years due to stiff global competition. TCL Communication’s unit sales, mostly cellphones, fell 36% to 21 million units in the first half of this year, while its revenue fell by 26% to 6.87 billion yuan ($1 billion). It posted a net loss of 852 million yuan for the period.

The company is currently pursuing a strategy that is seeing it bring in strategic investors for many of its non-core units in a bid to improve performance.