TCL Looks to Past to Revive BlackBerry Brand 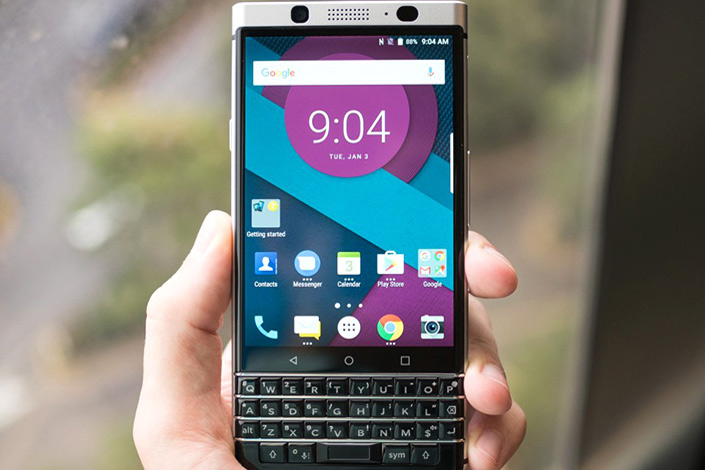 A publicity photo shows a prototype BlackBerry model, code-named "Mercury." TCL introduced the planned BlackBerry model with a video at the ongoing Consumer Electronics Show in Las Vegas. The first actual models are expected to be available in March. Photo: BlackBerry

(Beijing) — “Retro” was the word of the moment for struggling BlackBerry Ltd. at a major trade show this week, as it helped to showcase a model that could well be its last chance to avoid the scrapheap of failed smartphone brands.

But the real player behind the scenes was the far-lesser-known Chinese smartphone maker TCL Corp., which will design and manufacture all BlackBerry-brand phones under a licensing deal signed last month. TCL unveiled a prototype for its first BlackBerry model at the annual Consumer Electronics Show (CES) on Thursday in Las Vegas, winning guarded praise from critics hoping for a comeback.

Almost everyone was focused on the new model’s keyboard, a signature feature on many previous BlackBerry smartphones but rare in today’s world where virtual keyboards are the norm. TCL was once well-known in China for its own-brand cellphones, but said it will place its future bets on BlackBerry and its older Alcatel brand, which it acquired a decade ago from the French company.

“Among the first products in this portfolio is the latest BlackBerry smartphone, focused on three core features: security, productivity and reliability,” TCL said in announcing its first BlackBerry model, rumored to be named possibly Mercury or Press. “Previewed at CES, the smartphone draws on unparalleled mobile security and software expertise to offer the most complete end-to-end smartphone security available on Android.”

TCL provided a video of the new phone, with heavy focus on a traditional keyboard and a silver metal casing but little or no detail about the model’s features. It said phones will be available for reviewers at another major global trade show late next month.

Observers at the CES event were allowed to hold and feel prototype versions of the new model, though little or no software was available for inspection. The phones will use Android, the Google-backed operating system that powers the majority of the world’s smartphones. But fans of the brand are hoping the models will also have exclusive features developed by the original BlackBerry, which is exiting the hardware business and trying to transform itself into a software company.

The limited talk on the internet was relatively positive, though reviewers were careful not to commit before seeing working phones.

“We haven’t seen a physical keyboard on a flagship smartphone in quite a bit of time thanks to the proliferation of touchscreen keyboards,” wrote reviewers at the website XDA Developers. “However, if there’s one brand that can revive the physical keyboard — it’s definitely BlackBerry. We’ll be waiting … to learn more about the specifications and pricing for the device.”

Both partners are counting on the new alliance to resuscitate not only the BlackBerry brand but also their own fading smartphone fortunes. BlackBerry was once a household name known for its email-optimized smartphones, but has rapidly faded to irrelevance in recent years due to intense competition from a newer field of players, many of them from China.

TCL’s own smartphone business has also been struggling due to growing competition outside China, where the company logs the majority of its sales. The company’s smartphone sales slumped 19% last year, including a 28% plunge in December.