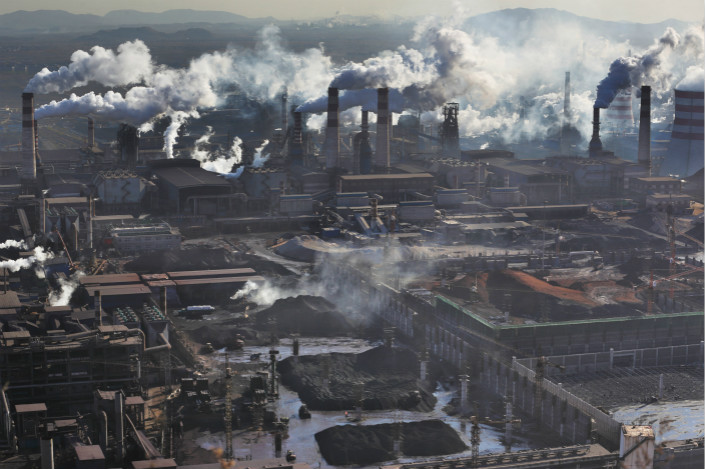 The national research and development body will help solve the smog problem as local authorities, such as those in Qianan, Hebei province (pictured), lack the resources to properly identify what causes the smog that chokes their cities, a Shandong province official told Caixin. Photo: Visual China

China is beefing up its research muscle to wrestle with air pollution.

The country’s top environmental watchdog has created a national research and development (R&D) taskforce to implement the more than two dozen research programs identified by the country’s cabinet last month.

Various research facilities in China are separately studying green technology and pollution, but the Joint National Center for Air Pollution Prevention can pool all these resources together and will be more efficient, a person briefed about plans for the center told Caixin.

A centralized system would also have the strength to push forward new environmental technologies and policies when dealing with regional governments, according to the source who wished to remain anonymous.

The State Council, China’s cabinet headed by Premier Li Keqiang, unveiled 28 research objectives on September 1. They include investigating the causes of air pollution, the specific pollutants produced by major smog sources, the impact of smog on public health and ways to tackle such challenges.

The national center tasked with designing and conducting different studies to meet these ambitious goals is comprised of top academics in environmental sciences and policy studies from several Chinese universities and research institutions including Tsinghua University and the Chinese Research Academy of Environmental Sciences in Beijing, according to a statement released by the Ministry of Environmental Protection (MEP) Monday.

In addition to implementing the national-level projects outlined by the cabinet, the center will also be tasked with helping regional governments in smog-choked parts of northern China to boost their own local R&D capacity and formulate strategies to fight air pollution.

According to the MEP, the center will dispatch research teams to work with the local authorities in 28 cities, including several in the municipal areas of Beijing and Tianjin and neighboring Hebei province. The government plans to integrate the Chinese capital and its neighbors into a megapolis nearly 6 times the size of metropolitan New York and home to nearly 10% of China’s population in coming years.

The new development zone, known as the Jing-Jin-Ji area is home to nine out of the 10 most polluted cities in the country, according to the MEP.

In spite of efforts to reduce air pollution in recent years, air quality in the Jing-Ji-Ji area worsened in the first eight months of the year, data from the MEP showed.

The region’s average concentration of PM2.5, fine cancer-causing particulate matter, rose 10% to 65 micrograms per cubic meter of air, or twice the level considered safe by the World Health Organization. There was a similar increase in the level of PM10 particulate matter, another major air pollutant that causes lung and heart diseases, the ministry said.

Setting up the national R&D center is a key step in the right direction because provincial or district level environmental bureaus have few research resources to identify the specific factors which cause the severe bouts of smog that choke their cities, said a local environmental official from the eastern province of Shandong.

“Even though we have all the statistics and data in front of us, environmental officials and academics at local research facilities might not know what to do with them,” said the official who wished to remain anonymous.

The environmental authority in Taiyuan, capital of the northern province of Shanxi and the sixth most polluted city in China this year, was among the first to jumpstart R&D programs with 40 policy-makers and scientists meeting in Beijing on September 25 to lay out guidelines for future research work, the Chinese environmental research academy said.