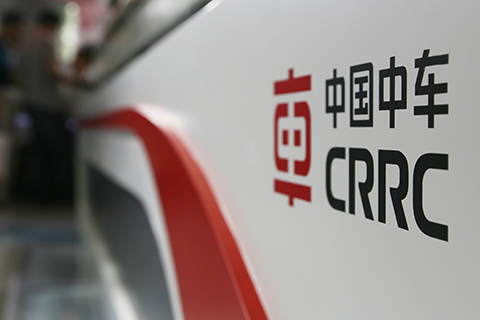 CRCC will cut half of its freight-car manufacturing capacity in a major business restructuring. Photo: Visual China

China’s leading train maker, CRRC Corp., will shutter half of its freight-car manufacturing capacity in a business restructuring to deal with excess capacity.

CRRC currently operates 10 freight-car production subsidiaries, with total capacity to produce more than 80,000 vehicles a year. But most of the subsidiaries have been mired in a business slump reflecting weakened cargo transportation demands amid an economic slowdown and excess supply.

Affected by slow freight-car sales, CRRC registered a 23.4% decline in net profit in the first half this year, following a 4% profit drop last year. In 2016, nine of the 10 subsidiaries reported net losses amid plunging sales.

“The freight-car business has reached its limit,” said a CRRC source who declined to be named.

Sources close to the company told Caixin Wednesday that CRRC is mulling a major reshuffle of its freight-car manufacturing in a bid to eliminate excess capacity.

The restructuring will consolidate most of CRRC’s freight-car production in its two strongest subsidiaries, CRRC Qiqihar Rolling Stock Co. and CRRC Yangtze Co.

The three companies have a combined annual capacity to produce 10,000 freight cars. Part of their manufacturing operations will be transferred to Qiqihar Rolling Stock and CRRC Yangtze.

It is unclear how the restructuring will affect the companies’ employees. According to company websites, both Erqi Vehicle and CRRC Shijiazhuang have more than 3,000 employees, while CRRC Guiyang has a workforce of more than 2,000.

According to a source from Qiqihar Rolling Stock, CRRC Chairman Liu Hualong has repeatedly called for adjusting CRRC’s business and asset structure to better allocate resources via a corporate restructuring.

CRRC plus four other manufacturers have total capacity to produce 100,000 rail cargo vehicles every year. CRRC controls about 80% of the freight-car market in terms of orders.