Government Limit on Number of Baby Formulas Sets Off Stampede 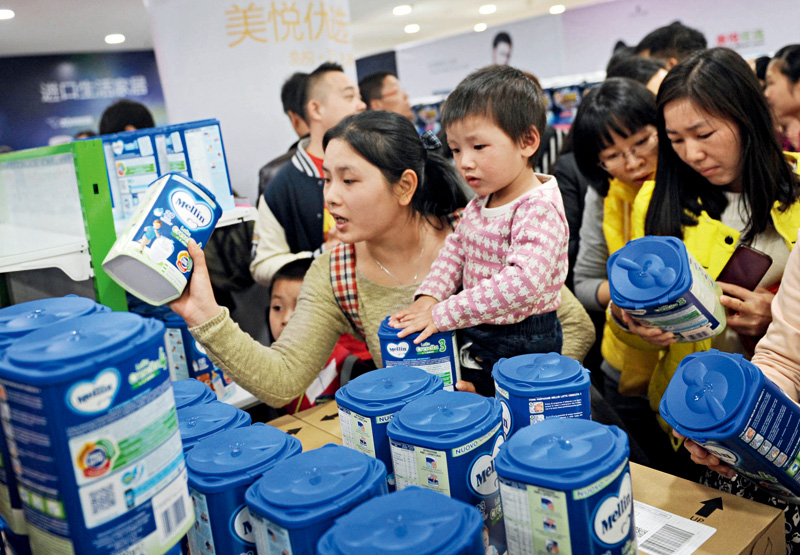 Customers scramble to buy imported baby formula from a store in the southern city of Guangzhou in January 2015. Photo: Visual China

A notice flapping on the entrance of an infant formula store in northern Beijing reads “discount sale and store for rent.”

The retailer is trying to empty its shelves, which are mostly stacked with foreign baby formula cans — especially brands that aren’t registered with China’s Food and Drug Administration (CFDA) — before new safety laws kick in on Jan. 1.

“Many small stores like ours that sell lesser-known overseas brands aren’t going to survive,” the store owner told Caixin. China’s baby formula industry is undergoing a complete makeover after a shift in regulation last year that limits each manufacturer to owning three brands. Each company is allowed to have up to nine different products, all of which must be registered with the CFDA by the end of the year.

The policy, which analysts consider the “toughest” announced so far, is designed to stop some formula makers from repackaging the same recipe under two brands just to occupy shelf space. The food safety watchdog wants to limit the number of infant formula products in China to about 1,000, said Ma Fuxiang, deputy head of the CFDA’s product registration department. So far, about 400 applications have been approved, according to CFDA data. So 60% of the quota remains unfilled.

Industry professionals estimate that there are more than 2,000 formula products being sold in China, which means more than half of them will have to bow out by the end of the year. This includes many brands from small overseas dairy producers that rely on independent stores like the one in northern Beijing for distribution.

But Chinese parents, rattled by a string of food scares including the 2008 melamine scandal, have adopted a wait-and-watch attitude, with many saying they’ll continue to buy imported formula.

“I’ll wait and see which foreign brands will be available (after the policy change), and whether the ones I buy now will still be available,” said Liu Wenting, a Beijing mother with an 11-month-old boy. “I’ll also do some research on the safety standards that the authority has instituted. But to be honest, I’ve heard there could be loopholes, so I think the products will have some flaws even if they are certified. I always worry about food safety within the country.”

The certification process includes submitting 10 documents that outline the companies’ research capabilities, as well as the product safety and scientific standards they follow. Authorities also will send teams to inspect production facilities, according to statement by a joint venture between China Mengniu Dairy Company Ltd. and Denmark’s Arla Foods. The joint venture had nine products approved.

Shot in the Arm?

The policy could still be a blessing in disguise for domestic formula makers bruised by the 2008 baby food scare, when tainted milk power led to the death of six infants and left more than 300,000 babies sick. Even products from major Chinese dairy brands such as Mengniu and Yili were then found to contain a chemical called melamine, which made milk appear to be richer in protein.

Since then, Beijing has proposed stricter rules for infant formula makers including more aggressive supervision of ingredients, limiting the number of small manufacturers and banning misleading advertising claims that say some products can enhance intelligence or boost the immune system. But scared parents continue to flock to foreign brands.

In 2016, the infant formula sales of 10 major Chinese brands totaled 25 billion yuan ($3.79 billion), 10 billion yuan less than the sales of the top five foreign brands in China, according to Expo315, an independent food market media outlet.

Still, local manufacturers are better equipped to jump through the hurdles of the new registration process. For example, Chinese dairy firm Beingmate Baby & Child Food Co. Ltd., which was among the first companies to be approved in early August, said its application for 12 formula recipes under four brands weighed 273 kilograms.

The Shenzhen-listed company sustained a 368 million yuan loss in the first half of the year because distributors were reluctant to extend contracts until its products were certified.

But within a month of getting the green light, the company secured seven sales contracts valued at 3.68 billion yuan, nearly a third more than its total revenue last year.

The CFDA has set aside a higher percentage of the overall quota for made-in-China brands, securities firm Bank of China International speculated in a recent report. Of the 66 companies that have completed the registration, 48 are Chinese, data from the CFDA showed.

Meanwhile, the number of products available from foreign brands may fall from a high of over 2,200 before 2014 to about 300 once the regulations take effect, estimated Wang Gang, an official from China’s Certification and Accreditation Administration.

But these deals could only help foreign players build closer ties with domestic peers and learn from the latter’s experience in navigating the regulatory maze. If overseas companies want to reintroduce their own brands to the China market, they’ll still have to go through the certification process.

Some foreign players have been clearing inventory and shifting to selling on cross-border e-commerce sites catering to Chinese consumers. For now, a special rule allows infant formula to bypass regulatory checks when they are imported, and online shopping sites will be responsible for their quality. But this loophole is expected to be plugged by the end of 2017.

The popular practice of “daigou,” or getting Chinese students or housewives abroad to currier foreign products to China including milk powder, has been another way for foreign brands to sneak into the country without much oversight. Although the government has tried to clamp down on the practice in recent years, some Chinese travelers abroad still return home with suitcases full of baby formula for friends or for sale on e-commerce sites like Taobao.

There are other gray areas or “an uncertainty factor about the new policy,” Song Liang, an independent industry analyst, told Caixin when the rule was first published in September 2016. Song said that big companies can avoid having their product portfolios squeezed by creating subsidiaries to make different formulas. For example, Yili has so far managed to get 21 products under four subsidiaries and joint ventures approved.

Parents are waiting to see how the shake-up will pan out, but purchasing habits are unlikely shift overnight.

“I don’t buy Chinese infant formula because many of them are too sweet,” said Wang Dan, a mother of a 2-year-old from Chengdu, Sichuan province. “If I can’t find the brands on market shelves here, I’ll continue to buy foreign brands through a daigou.”