The Therapeutic Power of Cancer Poetry 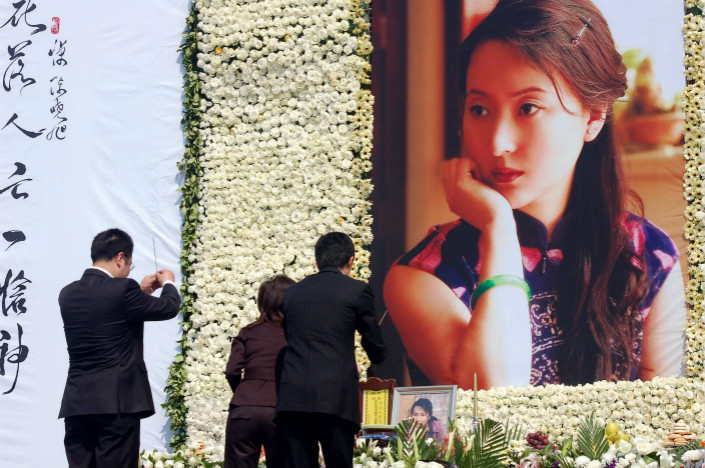 Fans pay their respects on the first anniversary of the death of actress Chen Xiaoxu in Beijing on May 13, 2008. Chen’s poetry, written while she was suffering from breast cancer, has since been widely shared on online patient forums in China as a way of coping with illness through art. Photo: Visual China

“Cancer is a rare and still scandalous subject for poetry; and it seems unimaginable to aestheticize the disease,” American essayist Susan Sontag once wrote.

But poetry can be more therapeutic than one might imagine. The power lies in the metaphors, which speak for — and therefore console — those consumed by pain, bodily decay, anxiety and despair.

Yao Yao, a young poet living in the mountains of Guizhou province of the Dong ethnic minority — a people who call themselves the Kam — has attracted a lot of attention with his poem “Breast Cancer.” Yao writes that:

robbing its own beauty, bit by bit.

The breast once her lover held tight,

once her child was fed on, is gone.

I always wonder, where is it now?

Is it crying with her somewhere?

Still, it is femininely and stunningly beautiful,

staring at her from the dark in countless sleepless nights…

Underneath the overly bleached patient gown

is a void on her left chest,

She listened to her doctor,

It is like another unwanted brassiere that people toss away.

In addition to their cathartic nature, some poems have helped break the silence on the growing scourge of cancer in recent decades. For example, a piece of free verse about lung cancer by Dr. Zhao Xiaogang, the deputy chief of thoracic surgery at the Shanghai Pulmonary Hospital of Tongji University went viral in January, which got people talking about how air pollution and other factors have led to an uptick in cases in recent decades.

Here are excerpts from Zhao’s poem, originally published on the October issue of Chest, the journal of the American College of Chest Physicians:

I long to be king,

With my fellows swimming in every vessel.

My people crawl in your organs and body,

Holding the rights for life or death, I tremble with excitement…

None cared when I was young,

But all fear me when full grown.

I’ve been nourished on the delicious mist and haze,

That sweetly warmed my heart

Finding inspiration in personal trauma isn't new. Forty years ago, American poet and novelist Deena Metzger was diagnosed with breast cancer. After a mastectomy, she collaborated with photographer Hella Hammid and graphic designer Shiela Levrant de Bretteville on a black-and-white portrait known as “Tree Poster.” Metzger poses exuberantly, revealing her scar that is now covered by a tree tattoo. The image remains an icon that encourages survivors to embrace their new, incomplete body. She once wrote:

I see the sign of the amazon the one who shoots arrows.

There is a fine red line across my chest where a knife entered,

but now a branch winds about the scar and travels from arm to heart.

grapes hang there and a bird appears.

What grows in me now is vital and does not cause me harm.

I think the bird is singing.

Another warrior is Treya Killam. Her five-year battle against breast cancer was chronicled by her husband Ken Wilber in the book “Grace and Grit.” In it, Wilber shares Mary Elizabeth Frye’s “Do Not Stand at My Grave and Weep,” which one of his relatives sent him after Killam’s death:

Do not stand at my grave and weep;

I am not there. I do not sleep.

I am a thousand winds that blow;

I am the diamond glints on snow.

I am the sunlight on ripened grain;

I am the gentle autumn’s rain.

When you awake in morning’s hush,

I am the swift uplifting rush

of quiet birds in circled flight.

I am the soft star that shines at night.

Do not stand at my grave and cry,

I am not there; I did not die

Before actress Chen Xiaochu’s life was taken by breast cancer, she had always said “I’m Lin Daiyu” — the beautiful, intelligent but frail and slightly melancholic protagonist in Cao Xueqin’s classic “Dream of the Red Chamber.”

When Chen got the part of Lin in a local production, word on the street had it that it was more because she was a poet herself, not so much for her looks or aura. Her friends and family believed the fictional character — who dies of heartbreak — had a big impact on Chen’s real life, seemingly another vivid case of how personality shapes one’s destiny. When Chen was on her death bed, she wrote:

When I die, will you be less gleeful?

Will you be sad for me?

and let me linger in your heart a while longer?

Will you feel lonely when I am not dancing with you at a ball?

When friends are chatting happily,

will you stay silent in a corner?

Amid sweet dreams in midsummer nights,

will you feel the tinge of a breeze?

On a snowy morning,

will you feel lonely?

When the world forgets my name,

will you still hum me a song of melancholy?

Life itself is a poem. It helps us vent, take a step back and reprioritize our lives, reclaim energy and move on. Don’t underestimate the power of poetry, its tongues of flame always render tumors less