By Lin Zizhen and Wu Gang 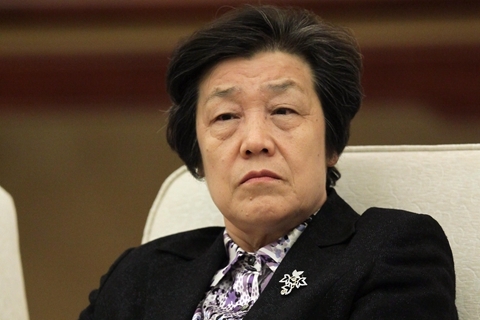 Former Minister of Justice Wu Aiying is one of 12 Central Committee officials who have been expelled from the Communist Party, according to an announcement from the committee’s plenary meeting last week. Photo: Visual China

Former Minister of Justice Wu Aiying has been expelled from the Communist Party of China, according to a statement following a four-day plenary meeting of the party’s central committee.

Wu, 65, stepped down quietly from her post in February of this year, as authorities announced that Zhang Jun, former deputy chief of the Communist Party’s Central Commission for Discipline Inspection, was taking over her post. There have been no reports about Wu since then.

The Central Committee statement last week did not disclose any details of Wu’s wrongdoings, except to say “serious breach of party discipline.”

Wu was elected as a member of the Communist Party’s Central Committee in November of 2012 during the 18th National Party Committee.

She is among 12 Central Committee officials expelled from the party, as announced by the committee’s plenary meeting last week. A total of 18 Central Committee members have been put under investigation for corruption since late 2012, according to official reports.

Another 17 alternate members of the Central Committee were also officially under investigation. Some of these officials have been prosecuted for crimes such as allegedly taking bribes and abusing their power.

Wu’s fall shortly followed the arrest in June of Lu Enguang, former head of the ministry’s political department, for alleged bribery. Earlier reports by authorities said Lu had faked his age, educational background and work experience over the years, and had been using “huge amounts of money” to bribe “government employees.”

Wu appeared in a recent TV documentary made by authorities to educate party and government officials about corruption and urge them to stay clear of it.

The central authorities sent an inspection team to screen the party committee of the Ministry of Justice in March and April in 2016, as part of the country’s anti-graft campaign that began in 2012. The inspection team pointed out that this ministry had a series of problems involving corruption, such as officials faking personal files, and abusing their power in approving reduction of jail terms or parole for criminals. The team also said it had received tips of some senior officials’ alleged corruption and had reported them to authorities.

During Wu’s tenure, the Ministry of Justice launched a series of regulations to tighten supervision over law firms, including a “Punishment Method of Illegal Practice of Lawyers and Law Firms,” which was released in 2010.