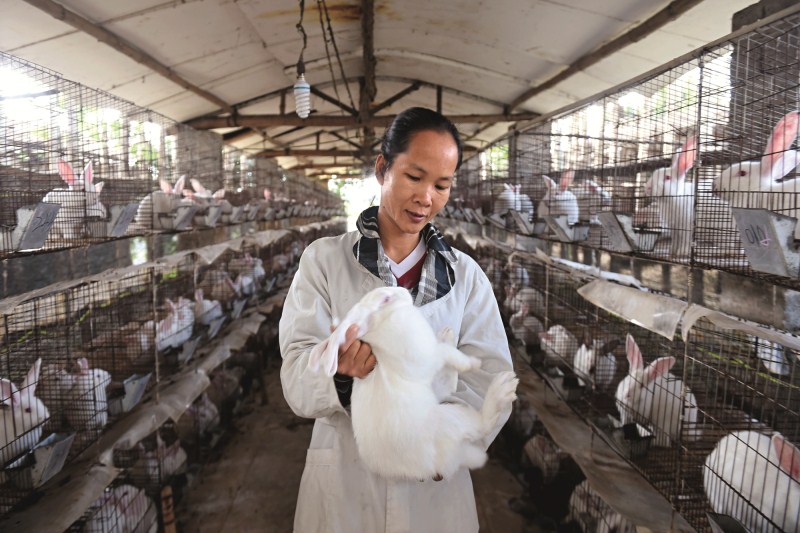 China has pushed financial institutions to better serve those without access to basic banking services, such as savings and loans. But analysts say it is a formidable challenge—and one in which the market, not the government, should play the leading role.

Since 2005, Beijing has stressed the need to develop inclusive finance, an initiative backed by the United Nations that calls for universal access at a reasonable cost to financial services including savings, payments, credit and insurance provided by sound institutions. In 2015, the central government designated expanding such services to those known as the “underbanked” as a national strategy, fitting in with its goal of boosting the growth of agricultural and small businesses.

This year, the central government called on large commercial banks to set up departments to promote inclusive finance.

Then in late September, the central bank announced it would lower the reserve requirement ratio (RRR) by 0.5 percentage points for some banks whose “inclusive finance” loans reach 1.5% of their new lending in 2017, a move that analysts expect will inject several hundreds of billions yuan into the economy.

These and other measures over the past decade have helped China’s inclusive finance develop -- at least in official data. By the end of June, Chinese banks’ outstanding loans to the agricultural sector stood at 30 trillion yuan, up 9.9% from a year ago and more than 25% of the total outstanding loans of the banking sector. Loans to small and micro businesses rose 14.7% to 28.6 trillion yuan (about $4.3 trillion), or 25% of lending.

However, how much the government-led campaign has actually helped the underbanked is still in dispute, especially among the rural impoverish who have long been ignored by bank credit services. Some analysts contend the upbeat inclusive-loan data provided by institutions are in fact inflated due to an unclear definition of what constitutes inclusive finance. Meanwhile, most of the institutions and companies that flooded into the inclusive-finance businesses have struggled.

Internet-based finance technology has emerged as another possibility for the underbanked. Tech giants such Alibaba Group and JD.com, as well as new online-lending platforms, for example, have increasingly offered credit services to small-scale borrowers.

“If risk control can’t catch up” to the speed of internet-finance development, “there will be great problems,” said Yang Tao, a financial expert at the China Academy of Social Sciences.

Digital technology will promote the development of inclusive finance, but the fundamental solution is institutional reform rather than technological progress, experts said.

“The problems of inclusive finance will never be solved under the old supervision and operation model,” said an industry insider, who argued that inclusive finance is best promoted by technological innovation and market forces rather than governmental regulations and policies.

“The development of inclusive finance should be spontaneous,” a regulatory official said. The proper role for regulators is to create a sound market environment for the market players to develop inclusive-financial services, he said.

The Chinese government’s efforts to broaden financial access to the underserved groups started in 2005 when a pilot program was launched to set up micro-loan companies in selected provinces. Since then 11,000 companies and 1,519 rural banks targeting small rural borrowers have mushroomed across China.

Yet, even though more institutions have been set up to help the underbanked, their performance has largely been disappointing. Most of the 1,500 rural banks targeting this niche were set up by large commercial banks, and only about one-third of them are profitable. Most of the rural banks rely on subsidies to survive.

Many of the banks have invested some of their deposits in non-agricultural projects to seek better gains. That, of course, departs from their mission to boost the agricultural sector. Since the beginning of this year, the China Banking Regulatory Commission--the country’s banking watchdog--has issued 200 punishment decisions against rural banks for violations in their lending, the official said.

Xiang Weiguo, chairman of the China Micro-Credit Companies Association, attributed the micro-loan companies’ poor performance to the worsening liquidity of their small-business clients, fierce competition from private fundraising activities and weak management of most micro-loan companies.

The major risk for financial institutions in extending loans to small-business and rural borrowers stems from the lack of widely recognized collateral, such as property and land. These kinds of borrowers may have assets in other forms. For example, 70% of smaller business’ assets consist of such “movable properties” as accounts receivable, inventory and equipment, which aren’t the traditional kind of collateral accepted by lenders, a World Bank expert said.

Profitability is also a concern. The regulators said financial institutions should only seek to break even or achieve minor profit in their inclusive-finance services. As an enticement, governments offer subsidies, tax incentives and other supportive policies to such businesses.

But a bank executive said such government orders discourage healthy market competition and depart from business rules. “Why are many institutions not willing to truly dedicate to inclusive finance? They only will when it makes money,” the executive said.

A lack of clarity about which businesses can qualify for these niche loans and related benefits has added an additional problem. Without a clear definition, many questionable companies have been able to use the inclusive finance program to gain preferential credit policies.

“Inclusive finance is like a basket and you can put anything inside,” a banking regulatory official said.

The Chinese government has played a leading role in promoting inclusive finance. But that isn’t true in most other countries, where non-governmental organizations (NGOs) are driving the effort to address the needs of the underbanked.

With the government’s deep involvement, it is important to draw a clear boundary between it and the market in developing inclusive finance, said Wang Jun, an economist at the China Europe International Business School.

“Financial institutions should be allowed to operate under market rules within a certain territory, while governments should offer infrastructure, proper supervision and set regulations rather than directly provide financial services or intervene in business operations,” Wang said.

One of the urgent tasks for the government is to figure out the true demand for inclusive finance.

“We have always talked about increasing the inclusive-finance supply, but no one knows clearly about the size of the targeted clients of such services and their real demands. Nobody has done careful research,” Wang said.

It remains unclear how well China’s inclusive finance market is doing, partly because players in this niche have a baked-in incentive to exaggerate achievements in the hopes of advancing their careers, Wang said.

Fang Xin, the deputy director of the central bank’s Chengdu branch, is among experts who believe the demand for inclusive finance services has been overestimated.

Based on a recent survey by the central bank’s Chengdu branch, the total amount of micro lending in China may be around 5 trillion yuan rather than the frequently cited tens of trillions of yuan, Fang said.

“In many places, there might be oversupply,” due to the perception of capital thirst by small business, Wang said.

Other experts and banking industry sources have called on the government to tighten oversight and promote market education on inclusive finance, as well as boost efforts to set up unified information-sharing and credit-scoring systems to help lenders.

But the government must be careful in deciding the scope of its role so that inclusive finance grows in a healthy way, Wang said.

“If the government places itself at the wrong position, it will distort the financial market, waste public resources and hurt financial stability,” he said.