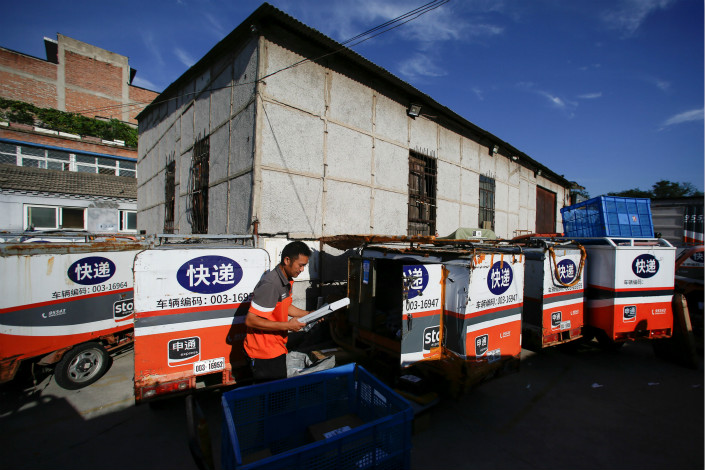 A planned new logistics insurer will be the first in China to be set up by delivery companies themselves. Above, Lei Wentao loads his cargo tricycle before his morning shift at a distribution hub of the Chinese express parcel delivery firm Shentong (STO) Express in Beijing on Aug. 29, 2017. Photo: Visual China

A consortium led by Chinese delivery companies is planning to set up a joint venture on logistics insurance, although whether they can secure an operating license from the regulator remains a major uncertainty.

The new logistics insurer will be the first in China to be set up by delivery companies themselves. However, the plan comes as the country’s insurance regulator is tightening its supervision of the industry and becoming more stringent when giving new licenses to non-insurers.

The new insurer is tentatively called Zhongbang Logistics Insurance Co. Ltd. and has 1 billion yuan ($152 million) in registered capital, STO Express’s statement said. STO Express and Yunda Holding said in separate statements that they will each invest 160 million yuan for a 16% stake.

Despite the fast growth of the delivery industry in China, traditional insurance companies lack policies that specifically cover the risks of the courier service providers, STO Express said. The new insurer will address such “agonies” by offering policies that compensate costs arising from transportation and other accidents.

Following the downfall of Xiang Junbo, the former chairman of the China Insurance Regulatory Commission (CIRC), the insurance industry regulator has been running a tight ship to rein in rising risks.

Not a single license for a new insurer has been issued since April, compared to six issued in the first two months of this year. Some newly established insurers have been asked to provide additional materials to explain their business plan and get final clearance to start operation.