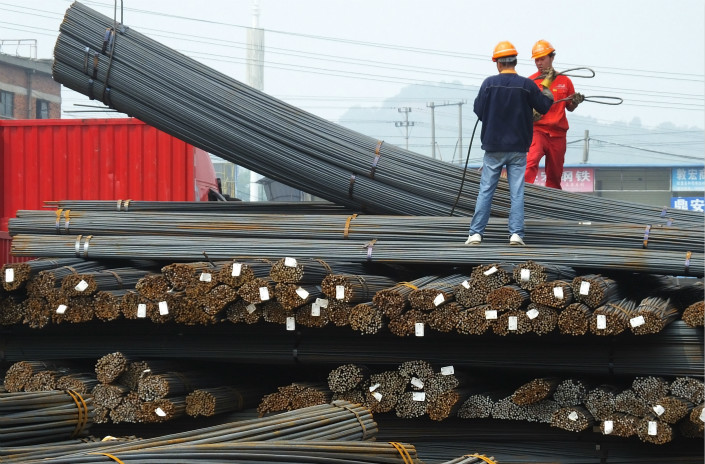 China’s slowing economic expansion and its shift away from a growth model that depends on manufacturing and investment have dampened demand for steel over the past few years. Above, workers unload steel in Yichang, Hubei province, in April 2016. Photo: Visual China

China’s stalling demand for steel will weigh on global consumption next year.

Chinese steel demand, which accounts for about 45% of the world’s total, is forecast to “show no growth” in 2018 as the Chinese government strengthens its efforts to balance the economy and crack down on pollution, the World Steel Association said in a report released Monday.

China’s slowing economic expansion and its shift away from a growth model that depends on manufacturing and investment have also dampened demand over the past few years. The government is also beefing up supervision and penalties on illegal emissions and discharges by industrial enterprises and other polluters amid growing public anger, which could affect demand for steel in sectors such as construction-material manufacturing.

The Brussels-based World Steel Association revised its estimate of the country’s 2017 demand for the metal to 3%, up from an April projection of 1.3%. In April, it had expected China’s steel consumption to fall 2% next year.

Nominal growth in this year is likely to be much higher at 12.4%, with demand hitting 765.7 million tons. The high growth figure is the result of China’s shutdown of most of its outdated induction furnaces. In the past, official statistics did not capture sales from these furnaces. Now that consumers have to buy from officially registered steel-makers, these previously unrecorded sales are making it into the government tally, according to the association’s report.

The slowdown in China’s demand is set to take a toll on global consumption. The World Steel Association forecast that global steel demand will increase 2.8% year-on-year in 2017 to 1.62 billion tons before growth slows to 1.6% in 2018.

Although risks to the global economy such as U.S. policy shifts, EU election uncertainties and Chinese growth deceleration have “to some extent abated,” escalating geopolitical tension on the Korean Peninsula, China’s debt problem and rising protectionism in many places remain concerns, said T.V. Narendran, chairman of the World Steel Association’s Economics Committee.

“In 2018, we expect global growth to moderate, mainly due to slower growth in China, while in the rest of the world, steel demand will continue to maintain its current momentum,” he said in the report. “The lack of a strong growth engine to replace China and a long-term decline in steel intensity due to technological and environmental factors will continue to weigh on steel demand in the future.”

China’s steel industry, particularly plants in the country’s north, is facing arguably the most draconian production curbs ever in the coming months as the government steps up measures to reduce choking air pollution that has regularly hit large swaths of the country in recent years. Authorities are holding to a campaign to cut excess capacity in industries that include steel, coal and aluminum.

China’s consumption of crude steel peaked in 2013 at 770 million tons. In the following two years, it fell 4% and 5.5% respectively before edging up 2% in 2016 to 709 million tons on the back of “surprisingly strong” growth in the infrastructure, real estate and auto sectors. However, the uptick is unlikely to turn around the general downward trend of demand, Xu Xiangchun, an analyst with mysteel.com, a Shanghai-based steel information service provider, previously told Caixin.