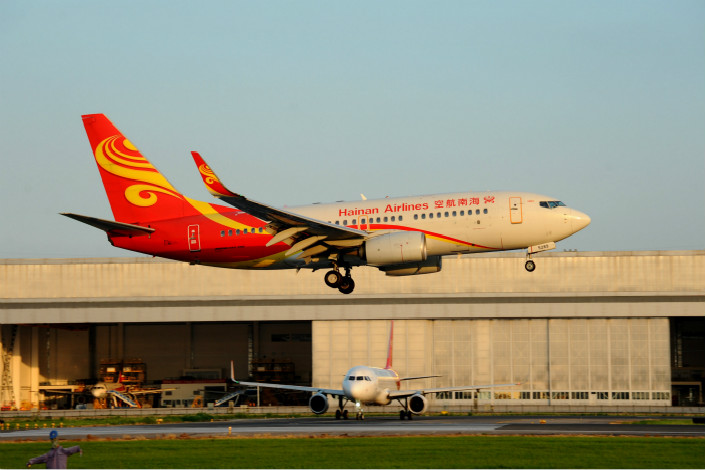 Board of directors member Tong Fu said the HiApp app, which will integrate several of HNA's businesses, will "provide our customers with a one-stop service, where their luggage can be shipped directly from plane to hotel, for example.” Photo: Visual China

Airline and travel conglomerate HNA Group Co. plans to invest up to 50 billion yuan ($7.5 billion) to launch a digital tourism platform as the company strives to diversify its businesses and move online.

The mobile application, HiApp — which will be launched before the end of the year — will bring together HNA’s offerings in the hospitality, aviation and financial sectors, HNA announced at a media event Tuesday.

The investment will cover the operation fees for the app as well as the cost of establishing an ecosystem in which other partners can participate, according to Tong Fu, a member of HNA’s board of directors. HNA will not exclude the possibility of merging with other companies, Tong added.

“Based on the assets we own, including airlines and hotels, among others, the app will provide our customers with a one-stop service, where their luggage can be shipped directly from plane to hotel, for example,” he said.

HNA, headquartered on the tropical island of Hainan, initially focused on travel and tourism, but has since taken steps to expand its business, mainly through acquisitions.

And last year the company made headlines with its plan to pay $6.5 billion for 25% of U.S. hotel giant Hilton Worldwide Holdings Inc. HNA has a stake in over 8,000 hotels around the world.

With the launch of HiApp, HNA hopes to remove the barriers between its different businesses by bringing them together on a single platform, which would also be open to other business partners, according to Tong.

But it’s not clear whether the platform will succeed, as there are already many similar services in the fiercely competitive online tourism market in China.