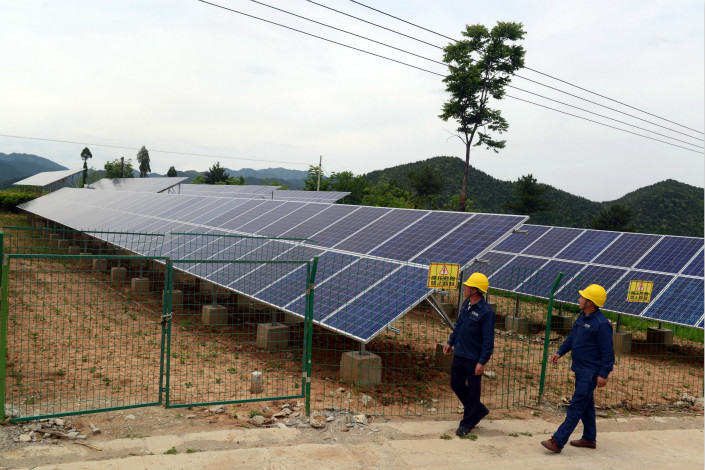 While all solar power-generating facilities are allowed to sell their electricity to the national grid at above-market rates, these rates were lowered last year for larger farms but kept unchanged for distributed systems. Photo: Visual China

China’s installation of “distributed” solar power systems soared in the first nine months of the year, as companies and individuals raced to set up small-scale generators typically based on rooftops and in factory compounds to take advantage of government subsidies.

Solar power production is generally divided into two camps: traditional big solar farms spread out over large areas and capable of producing several megawatts per year; and smaller “distributed” projects that generate power used on site by a home or business owner. China has focused on the latter this year, following recent construction of many larger solar farms that often have problems due to insufficient planning.

China installed 15 gigawatts of distributed power systems in the first nine months of the year, four times more than the same period a year earlier, according to data released at an event hosted by the China Photovoltaic Industry Association on Wednesday.

Distributed projects represented about 35% of all new solar power installation in the first nine months, up sharply from just 10% a year earlier, according to the association’s data. The total 42 gigawatts in new solar power installations during the first nine months brought the nation’s total to 120 gigawatts, of which nearly 80% is from larger solar farms.

China has aggressively promoted the development of renewable energy sources like solar, wind and hydropower, in a bid to create cutting-edge technologies that can be exported and lessen its reliance on polluting coal-fired plants. But in a typical national pattern for such promoted sectors, incentives meant to encourage development led to construction of poorly planned new solar farms, many of them in remote western parts of the country. By comparison, distributed power projects are less prone to such problems because they are much smaller and usually in urban areas for use by the actual builder.

In order to encourage development, builders of solar power-generating facilities are allowed to sell their power to the national grid at rates well above market levels. But Beijing lowered those rates by 13-18% last year for builders of big solar farms.

By comparison, it left the rates unchanged for builders of distributed systems, which may be fueling this year’s construction boom, according to photovoltaic association Secretary General Wang Bohua. He said promotional programs by regional governments may have also helped to fuel the boom, as well as concerns that subsidies for distributed power projects might be reduced next year.