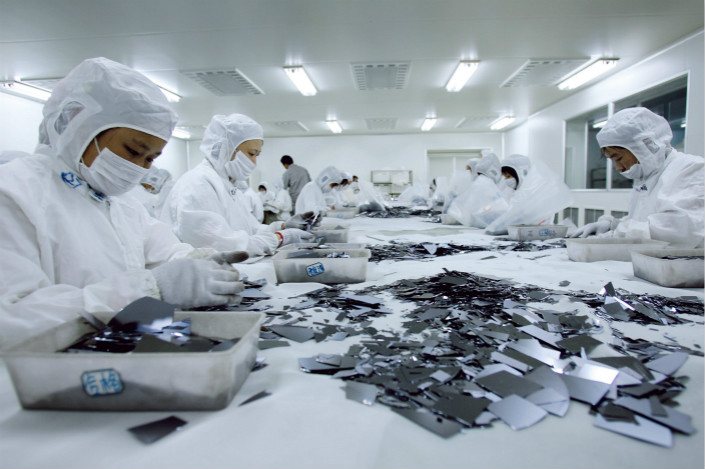 Solar energy firms are focusing on their strengths amid a global downturn, an analyst said, with some firms pulling back from power plant investment while others, such as ReneSola (whose workers are pictured manufacturing solar cell components), are moving aggressively toward infrastructure projects. Photo: Visual China

Two Chinese solar energy companies have taken steps to move away from the crowded panel manufacturing sector toward more profitable and stable projects in solar plant development and operation.

Affiliates of the company will sell 13 solar energy infrastructure projects in Japan to the infrastructure fund as its initial portfolio, Canadian Solar said in a statement.

Meanwhile, rival ReneSola will sell all of its assets and liabilities from its money-losing solar panel-manufacturing and LED distribution businesses to its chairman, Li Xianshou, the firm announced Tuesday.

The sale will help ReneSola “dispose of its asset-heavy and debt-heavy businesses and focus on its asset-light and high-margin project business,” the company said in its statement.

The announcements come at a time when solar panel makers worldwide are grappling with slowing demand and oversupply, after years of expanding production capacity. Manufacturers in China, the world’s largest producer of solar panels, face additional challenges in the form of anti-dumping tariffs in the major markets of Europe and the U.S.

In June, ReneSola said Li had proposed buying the company’s manufacturing business, which it valued at negative $81 million, including debt. That week, ReneSola reported a 40% fall in revenue for the first quarter of 2017.

Canadian Solar has fared slightly better, with a $91.4 million profit in the same quarter, down from $112.5 million the previous year. Canadian Solar has been focusing more on building power plants in recent years, acquiring solar developer Recurrent Energy for $265 million in 2015.

But not all solar energy companies are reacting in the same way to the global downturn, according to Gary Dvorchak, whose firm Blueshirt Group LLC advises solar firms, including Renesola.

Some, like Renesola and Canadian Solar, are “moving aggressively to (power plant) projects,” Dvorchak said, while “others like JA and Jinko are pulling back. Each are focusing on their strength.”