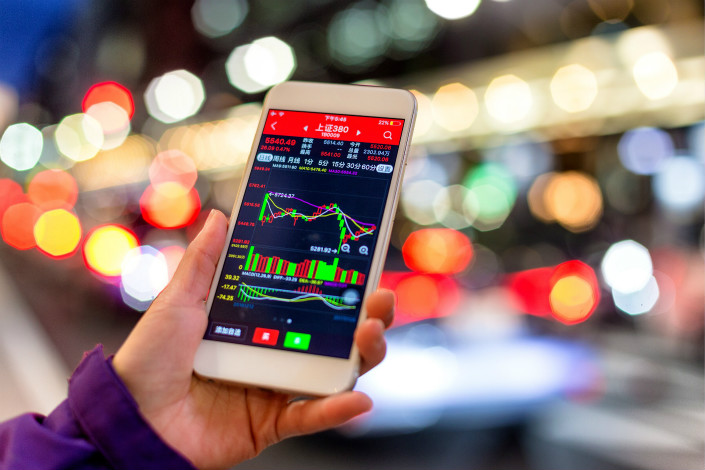 The price of the most-traded five-year government bond futures contract fell 0.32% to 96.65 yuan on Wednesday, the steepest percentage decline since May and the lowest price since August 2015. Photo: Visual China

China’s bond market, already in a state of anxiety over the campaign to curb financial leverage and the prospect of higher interest rates, got another dose of the jitters this week as speculation swirled of an impending crackdown on interbank borrowing that could further hit demand.

Government bond futures slumped and yields surged on reports that financial regulators planned to impose stricter controls on borrowing by commercial banks in the interbank market, the main source of short-term funding for financial institutions and the biggest trading platform for bonds. Traders said the trigger was speculation that the government, starting in January, will lower the limit on interbank borrowing to 25% of a bank’s total liabilities from the current 33%.

The stricter limit on interbank borrowing could have a negative impact on the ability of smaller banks in particular to raise short-term funding and make less money available in the interbank market. That could tighten liquidity conditions and force money-market interest rates higher, making it more difficult and costly for banks and other financial institutions to buy government bonds, leading to a drop in demand.

Asset managers with multiple commercial lenders told Caixin that they had not received directives from the banking regulator about reducing the amount of interbank lending. And while the People’s Bank of China (PBOC) did not respond to Caixin’s request to confirm or deny the reports, the official Xinhua news agency put out a one-paragraph report late on Wednesday evening that cited the central bank as saying the speculation was “untrue.”

“Investors fear that regulation will tighten further,” a bond trader told Caixin. “So they expect bond prices will continue to fall as stricter rules are rolled out after the 19th Party Congress.”

The ruling Communist Party on Tuesday ended its congress, which takes place once every five years. The week-long meeting saw Xi Jinping, the head of the party and the country’s president, reaffirm his administration’s commitment to curbing sky-high borrowing that foreign institutions such as the International Monetary Fund fear could trigger some kind of financial crisis.

PBOC Governor Zhou Xiaochuan had already spooked the bond market last week when he forecast, ahead of the release of third-quarter gross domestic product data, that the Chinese economy could grow by as much as 7% in the second half of the year, defying expectations of a slowdown and raising concerns that interest rates would have to increase. In the event, Zhou’s prediction turned out to be optimistic. GDP growth slipped to 6.8% year-on-year from of 6.9% in the second quarter.

Zhou also raised the alarm over a possible Minsky Moment in China, warning at a press conference during the party congress that the authorities needed to focus on preventing systemic risks that could lead to a crash in asset prices.

Guo Shuqing, the head of the China Banking Regulatory Commission (CBRC) added to the gloom, telling reporters that financial watchdogs would continue their crackdown on risky practices by financial institutions that involved increasing their leverage to speculate on other investments.

Guo said that regulators’ focus is on risks associated with interbank lending and borrowing, wealth management products and off-balance-sheet assets because these are the areas most likely to amplify financial risks or fuel bubbles in the property market.

Since late March, the CBRC has issued several policy documents detailing new and tightened regulations that aim to reduce systemic risks, promote deleveraging and improve governance of the banking sector. The commission has also sent officials to carry out on-site checks of the banks, targeting their off-balance-sheet activities, including entrusted loans that exploit regulatory loopholes to invest in illiquid assets such as property in pursuit of higher returns.

The jump in yields over the past few days has been bad news for investors who piled into the bond market in expectation that slower economic growth would put an end to further tightening, leading to an increase in bond prices and a fall in yields. A trader from a state-owned bank told Caixin that the yield on 10-year government bonds was at a two-and-a-half-year high when the party congress opened and by the time it closed, the yield had jumped to an almost three-year high.

“I’m sure many banks are already sitting on paper losses,” he said.