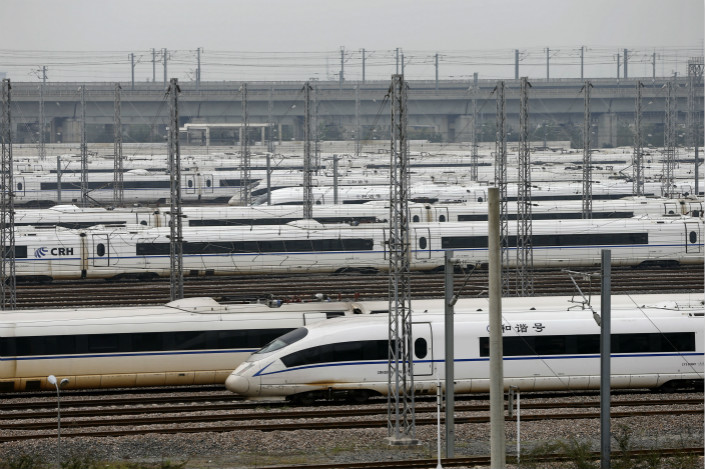 The new carriages for China's high-speed trains will eliminate current limitations on the length of the trains, allowing them to be as short as two carriages to as many as 16. Above, high-speed trains are parked in Shanghai in Oct. 2015. Photo: Visual China

A next-generation carriage that will add huge flexibility to China’s high-speed train fleet made its debut in Shanghai this week, sporting a new double-decker design and the potential for specialty short trains to accommodate VIPs.

Dubbed with the temporary name of 3X, the new cars should help China Rail Corp., the national rail operator, in its march to operational profitability, as it seeks to squeeze more money out of its state-of-the-art high-speed rail network, the world’s biggest. Caixin first disclosed details of the new cars in February, and got a glimpse in their first public display at a trade show in Shanghai this week.

Despite its state-of-the-art nature, China’s current fleet of high-speed trains are relatively inflexible, limited by technology constraints to either eight or 16 carriages. The new carriages will eliminate those limitations, allowing for trains from as short as two carriages, which could be used to transport VIPs, to as many as 16.

In addition to their flexibility to meet demand based on seasonal patterns, the new design will also allow for removal of individual cars for maintenance. With the current technology, entire trains must be taken out of service just to make repairs or perform other maintenance to a single carriage.

The new design will also feature double-decker capabilities for all cars, including dining, sleepers and regular seating, which will increase capacity by about 50%, officials told Caixin, in introducing the new designs that will allow a single train to carry more than 1,500 people. Trains will be able to travel at maximum speeds of 350 kph (217.5 mph), matching the new maximum recently rolled out along the popular Shanghai-to-Beijing line. Most other trains currently travel at a maximum speed of 300 kph.

China has spent hundreds of billions of dollars over the last decade building a 22,000-kilometer state-of-the-art high-speed rail network, aiming to create a viable travel alternate for flying along popular shorter routes in the country. It also wants to develop high-tech products that can be exported, and has become an aggressive bidder for high-speed rail projects in both developing and developed markets.

That aggressive expansion was a driving factor behind the merger announced last month between the rail operations of two of its chief global rivals, France’s Alstom and Germany’s Siemens. The latter was also showing off its own next-generation rail car, the ICE4, at the Shanghai event this week. Like the 3X, the Siemens model can be arranged in train configurations of five to 14 carriages, though its maximum speeds are slower, at 230 kph.

The Siemens model has been in testing trials for about a year. The 3X is still undergoing testing at the factory where it is being built by CRRC Corp. Ltd., the nation’s main rail-equipment builder, in the city of Tangshan in North China’s Hebei province. A timetable for the Chinese model’s commercial release has yet to be announced.