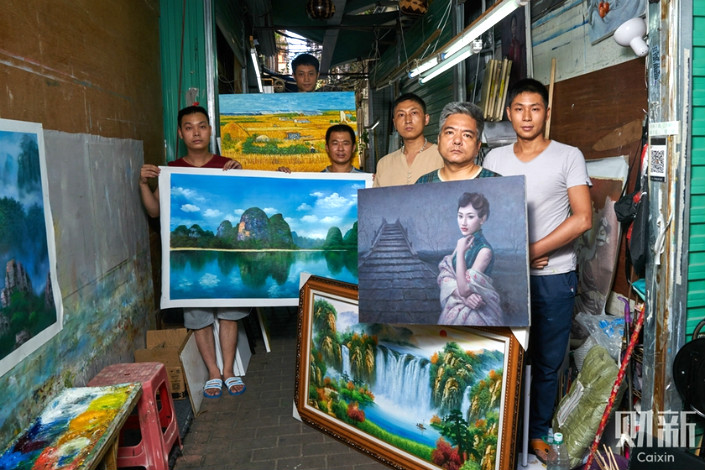 Workers in Dafen, Shenzhen, pose with their artwork. Thirty-seven-year-old Zhang Zhibin (third from left) has worked in painting workshops around the country, but decided to settle in Dafen due to the size of its industry. 50-year-old Li Hongmin (second from right) started his artistic career in Dafen in 1991, and has watched the village grow since then.

Dafen, a village that once found success with its painting production lines, which churned out thousands of replicas of the same oil paintings for sale overseas, has been undergoing a tough transition since the global financial crisis in 2008. The village, which sits within the borders of the Shenzhen special economic zone, found it could no longer rely on the international market and has had to shift its attention to domestic consumers.

Dafen’s art industry was born in 1987, when Hong Kong art dealer Huang Jiang set up the village’s first painting factory. Huang hired a few workers and distributed the artistic endeavor between them. Day in and day out, one was in charge of drawing skies, while another drew lakes. Through this standardized process, Dafen became well-known for its replicas of Western classics, produced rapidly and cheaply.

The village’s art industry reached its zenith in 2004 when it had almost 1,200 workshops that employed around 10,000 workers. Zhou Feng, a Dafen gallery owner, says that he worked around the clock back then, packing up paintings and sending them abroad. Dafen grew quickly thanks to China’s reform and opening-up, and artists flooded in to occupy the village’s rapidly expanding stock of low-rent housing. Dafen was the only arts exhibition site part of China’s International Cultural Industry Fair in 2004.

Attracted by this artistic village, English painter David McDermott moved to Dafen in 2008 after reading about it in a Chinese magazine. There he met his second wife and settled down to start his new artistic career, earning extra cash teaching English and running a wine business. He says that impressionist works, of a style popularized in Europe in the 19th and early 20th centuries, sell best in China.

Unfortunately, Dafen hit a crisis when overseas demand collapsed during the financial crisis of 2008. That November, the national government introduced new policies to increase domestic demand and reduce losses caused by the global financial crisis, along with a hefty stimulus package. To survive, Dafen shifted its focus to the Chinese market. Zhou, the president of the Dafen Art Industry Association, said that part of this transition was the development of more original art with distinctive styles and updated versions of classical Chinese themes.

For the painters of Dafen, art has two meanings. On one hand, they earn their living through the repetitive reproduction of similar paintings. But on the other hand, many of them wish to express themselves creatively. Many of the facades of the small houses that line Dafen’s streets are available to rent for local artists who wish to put their own works on display to attract customers. But change is coming once again to disrupt Dafen, as the city government plans to demolish many of these buildings to redevelop them.

Regardless of whether Dafen is able to make a success of its transition, Zhou maintains that its cost-cutting mass-production model will have a long-lasting legacy as it was able to bring artwork within the reach of the general public.