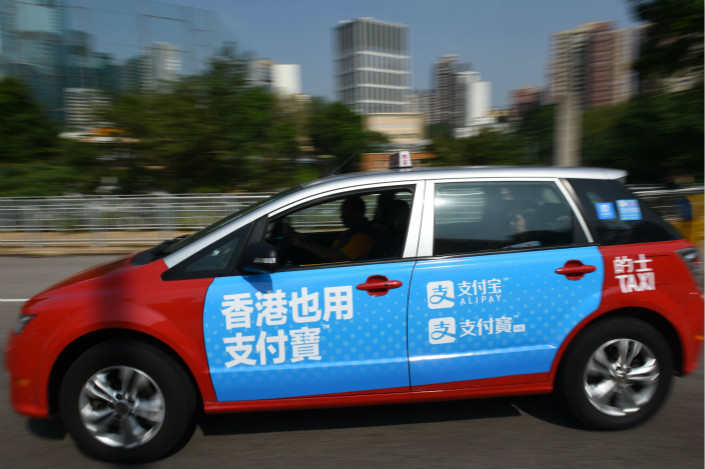 Sector leaders Didi Chuxing and Alipay are moving into Japan and Hong Kong with new taxi tie-ups, catering to the growing legions of Chinese who travel overseas for work and play.

Alipay announced two new partnerships that will make its popular electronic payment service available in thousands of Hong Kong’s trademark red taxis, both for mainland Chinese as well as local residents. In separate news, private car services specialist Didi is reportedly nearing an agreement that would allow Chinese users of its app to hail thousands of cabs in Japan.

Both Alipay and Didi are following a global expansion path similar to many Chinese service operators by making their services available first to millions of Chinese traveling abroad. Some 6 million Chinese traveled abroad during the recent weeklong Oct. 1 National Day holiday alone, according to the China National Tourism Administration.

While targeting Chinese travelers is relatively easy, selling their services to local consumers in overseas markets is more difficult because players like Alipay and Didi must compete with entrenched local rivals, and also provide local consumers with market-specific apps and other tools.

Alipay parent Ant Financial Services Group took one of the first major steps in targeting local consumers last month, when it announced a major new tie-up aimed at people in Hong Kong. That deal saw Ant form a joint venture with local tycoon Li Ka-shing, whose business empire includes a number of major local consumer-facing businesses in everything from groceries to mobile service.

Under its latest Hong Kong tie-up, Alipay will bring its payments service to Hong Kong taxis working with local mobile payment system developers YedPay and Valoot, it said Monday. The partners have already rolled out Alipay services for mainland visitors and local Hong Kong residents in several dozen taxis throughout the city, and plan to expand it to thousands more through November.

“This partnership strengthens the cooperation between Alipay and Hong Kong (small and midsized enterprises), empowering taxi drivers with a smoother and more efficient payment method, and marks an important step for Hong Kong’s transformation into a smart city,” said Venetia Lee, general manager of Alipay’s unit for Hong Kong, Macau and Taiwan. ‘With this partnership, Alipay now covers the three major scenarios of shopping, dining and transportation across the Greater Bay Area.”

The latest Hong Kong tie-up comes just two weeks after Alipay announced a similar partnership that would make its service available to Chinese taxi users in the popular U.S. destinations of New York and Las Vegas.

Meantime, Didi, which merged last year with the Chinese unit of global giant Uber, is in talks for a tie-up that would let Chinese users of its app hail taxis operated by Japan’s Daiichi Koutsu Sangyo Co., Bloomberg reported, citing a person familiar with the matter. The two sides plan to launch a service next spring, targeting mainland Chinese visitors to Tokyo, Osaka, Kyushu, Hokkaido and Okinawa.

A Didi spokesman told Caixin that “as an open platform we are exploring broad collaborative opportunities in Japan, but we do not have a timetable yet.” He declined to comment further.

Such a partnership would mark one of the first allowing Didi’s Chinese customers to use the service outside their home market. Didi previously experimented briefly with a similar interoperability agreement with U.S. operator Lyft, but has since ended that arrangement because the service "still needs lots of improvements," the spokesman said.

It has other more technology-related partnerships with Lyft, as well as partners in Brazil, India and Southeast Asia.

The story has been updated to directly quote a Didi spokesman on the reasons for the company's decision to end its interoperability agreement with Lyft.