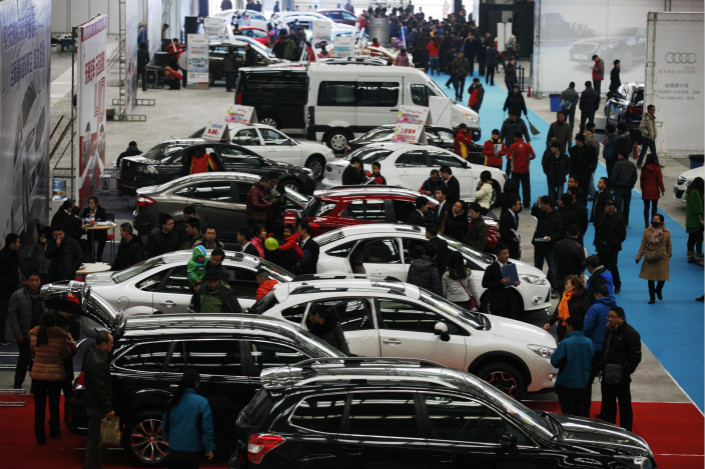 Yixin Group Ltd., an online auto financing company, has set a price range of HK$6.60 ($0.85) to HK$7.60 a share for its initial public offering in Hong Kong. At that range, the company would raise between $740 million and $870 million. Photo: Visual China

Yixin Group Ltd., an online car financing company backed by three of China’s top internet companies, is hurtling ahead with a Hong Kong IPO to raise up to nearly $900 million, as enthusiasm on a new generation of financial technology (fintech) companies starts to stall.

The company has set a price range of HK$6.60 ($0.85) to HK$7.60, with plans to issue nearly 880 million shares in Hong Kong, according to a source with direct knowledge of the deal, speaking on condition of anonymity because the matter is private. At that price range, the company would generate between $740 million and $870 million in proceeds.

The deal could value Yixin at up to about $6.5 billion if shares price at the top of their range. The company expects to price the offering later this week, with shares expected to debut next week, the source said.

Yixin is a unit of New York-listed Bitauto, an online auto specialist. A year ago Bitauto announced a deal that saw Yixin receive $550 million from a group of new investors that included Baidu Inc., Tencent Holdings Ltd. and JD.com Inc., three of China’s leading internet companies. Bitauto said it would continue to hold 47% of Yixin’s shares at that time.

Yixin is one of a new generation of Chinese private fintech companies that have rolled out services over the last five years as Beijing opened up a financial services sector that was previously controlled by big state-owned institutions. Some of the largest players have begun to make IPOs this year as they achieve economies of scale and strong growth stories to show investors.

In addition, peer-to-peer lender Ppdai is making a listing to raise $350 million in New York, in a deal whose shares are expected to debut later this week.

While sentiment toward fintechs was initially strong, both Qudian and ZhongAn have seen their shares give back much of their big early gains as investor enthusiasm has cooled. ZhongAn shares initially soared nearly 60% after their trading debut, but have moved steadily downward over the last month and now trade just 30% higher. Likewise, Qudian shares initially jumped as much as 45% above their IPO price, but now trade just 4% higher.