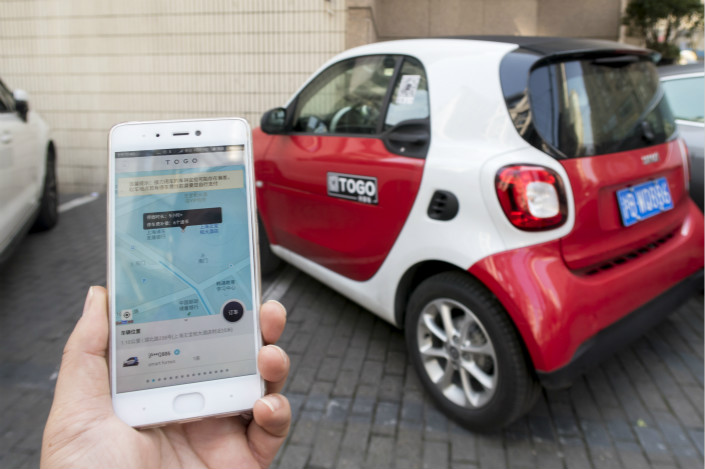 Though car-sharing startups have struggled to build a profitable business model, Mobike's position as a leader in the sharing economy may give it an advantage over its rivals. Photo: IC

One of China’s leading bike-sharing companies is pedaling into a new area — car sharing.

Mobike is partnering with electric car-maker Xinte Electric to launch a fleet of shared automobiles, which the duo is dubbing Mocars, according to media reports.

A Mobike representative would not confirm the deal but said the company is seeking to explore “innovative business models” with many partners, including with Xinte, to move beyond its core bike-sharing business.

Mobike’s strategic shift comes as the bike-sharing industry in China has matured, producing a first merger in the sector after a two-year frenzy of growth.

“As the company’s bike sharing business has stabilized, it has had to find a ‘new story’ to tell. That is why it wants to enter car sharing,” said Wu Dong, a professor at Zhejiang University’s School of Management.

Unlike bikes, car-sharing requires heavy investment and faces significant obstacles, such as regulations and infrastructure.

There are now more than 100 companies that provide car-sharing services in China, many of which want to hitch a ride on the sector’s early stages.

The majority of shared cars are owned by startups backed by automakers, including big foreign names. Mercedes-Benz, for example, introduced its car2go brand in southwestern China’s Chongqing last year, and BMW plans to launch 100 shared cars under its ReachNow subsidiary in neighboring Chengdu.

But none have turned a profit, according to research by PricewaterhouseCoopers and Roland Berger. Last month, car-sharing startup EZZY announced that it would cease operations and close down.

It is unclear how Mobike will find a sustainable profit model, but industry experts said the company’s leadership status as a “sharing business” would give it an advantage to compete with competitors.

“A large user base has helped the company acquire massive amounts of data, which could be used as new source of revenue as it moves into other sectors,” Wu said.