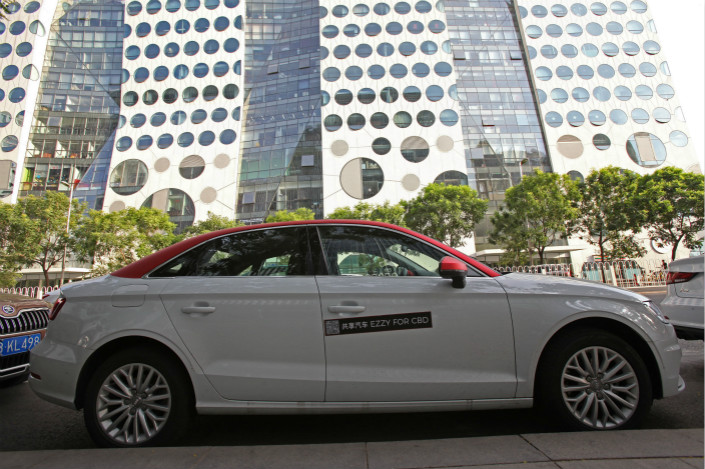 EZZY required users to pay a 2,000 yuan ($301) deposit, after which they could unlock and drive a car. The deposit is roughly equal to the average monthly disposable income of a Chinese national in 2016. Photo: Visual China

A car-sharing startup has announced that it will cease operations and close down, becoming the latest failure in China’s sharing economy craze.

Beijing Da Dreams Technology Co. Ltd., which runs car-sharing brand EZZY, told users in a text message on Wednesday that they should apply for a refund of their deposit. EZZY required users to pay a 2,000 yuan ($301) deposit, after which they could unlock and drive a car. The subsequent fee was based on the length of the drive.

An EZZY employee told Caixin that the closure was due to a capital crunch, and she was unsure how many users will be affected.

An EZZY user, who goes by the online pseudonym of Duolevivi, said Monday on social media site Sina Weibo that she applied for a deposit refund in late September, but still hasn’t received her money. Her post — which was reported on by Chinese media outlets — has sparked speculation about the company’s finances.

She said she has been contacted by more than 100 other EZZY users that have had trouble getting their deposits back. The deposit is roughly equal to the average monthly disposable income of a Chinese national in 2016.

Car-sharing businesses emerged in the West in the 1990s, but didn’t appear in China until over a decade later. There are now more than 100 companies, large and small, that provide car-sharing services in China, most of which are carmakers that want to hitch a ride on a sector still in its early stages.

The majority of shared cars are owned by startups backed by automakers — including some big foreign names. Mercedes-Benz, for example, introduced its car2go brand in southwestern China’s Chongqing last year, and BMW plans to launch 100 shared cars under its ReachNow subsidiary this year in neighboring Chengdu.

Yet, none of the car-sharing businesses in China have turned a profit, according to research by both PricewaterhouseCoopers and Roland Berger in April.

Car-sharing requires heavy investment, more than half of which goes toward vehicles, and launching 1,000 cars costs hundreds of millions of yuan, industry insiders told Caixin. Moreover, insurers charge premiums for shared cars that are 50% to 100% higher than for private cars, as it is a new business model subject to evolving regulation, especially regarding accidents.

China’s heated sharing economy, which has gathered speed over the last 18 months and has covered bikes, apartments, umbrellas and phone chargers, has started to see its first batch of washed-out businesses.

Bike-sharing startups Wukong and 3Vbike have closed down as they couldn’t compete with richer rivals that can afford discounts and free rides to attract users. Many of their bikes were stolen.

Meanwhile, an umbrella-sharing startup found that almost all the approximately 30,000 umbrellas it made available to the public were stolen less than a month after the company launched the service.

EZZY is not the first victim in the cash-burning car-sharing business. Smaller player Uu announced it would shut down in March, and co-founder Li Yu said that the sector’s business model was “not yet mature.”