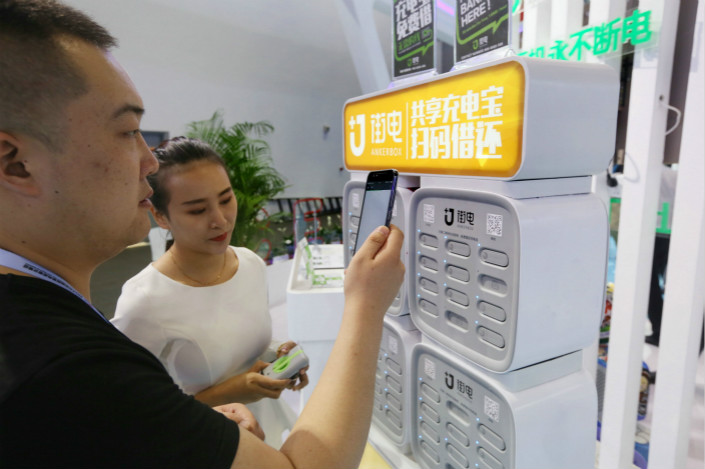 Shared phone-charger company LeDian said it is halting operations because of "company policies." Above, attendees of the Beijing International Service Trade Fair examine a Jiedian case of rental phone chargers on May 28. Photo: Visual China

The batteries of China’s nascent shared phone-charger businesses seem to be running low — one of the startups has become the first to halt operations, while another has cut the majority of its staff.

Hangzhou-based LeDian said Wednesday in a notice published on its public account on the WeChat social network that it will refund users’ deposits because it has decided to halt operations.

The company attributed the closure to “company policies.” Calls to the telephone number it provided in the refund notice went unanswered.

Similar to its shared phone-charger rivals, of which there are over a dozen, LeDian placed cases containing portable power banks in busy commercial areas, such as shopping malls and bus stations. Users could access a charger, compatible with both Android and iOS phones, after paying a deposit, and were billed based on how long they use the device.

LeDian said in March that it had placed 300 such cases, each containing nine chargers, in Hangzhou, the capital city of East China’s Zhejiang province.

Meanwhile, LeDian’s Shanghai-based peer HiDian has downsized its staff by about two-thirds, or approximately 200 employees.

The company, which is operating in eight Chinese cities, allegedly fired some employees without offering any reason and forced out others by either relocating them to remote cities on short notice or docking their pay to cover the cost of device losses for which the employees were not responsible, a former HiDian employee who asked not to be identified told Caixin.

HiDian founder Liu Wenyuan told Caixin on the phone that it was “not convenient” to comment.

The nascent industry, which emerged earlier this year, has attracted venture money eager to bet on China’s shared-economy craze. Some of the largest investments went to startups including Xiaodian, which in May secured 350 million yuan ($53.1 million) from Tencent Holdings Ltd. and Sequoia Capital; and HiDian, which raised 100 million yuan at about the same time.

But observers have divergent views on the industry. Qu Kai, founder of tech media outlet The 42, said that a power bank costs just a few dozen yuan; if each rental costs users 1 yuan, the company can recover the cost of a bank and start making a profit within just a few uses. But demand for such services will likely decrease, said independent e-commerce analyst Li Chengdong, as many Chinese consumers already own their own affordable portable power banks, and smartphones’ battery lives are getting longer.

“When my phone is dead, I haven’t even got the chance to scan the QR code,” which users must do to access a power bank, wrote a netizen nicknamed Feixiang on Weibo, China’s Twitter-like social network platform.

The shared economy has been a heated sector in China since last year. Entrepreneurs have found that the concept can support a variety of products, including bikes, umbrellas, portable chargers and even basketballs.

However, it has run into hurdles due to thefts and the difficulty in making a profit.

Shared-bike operators, one of the fastest-growing subsectors of the sharing economy, have already seen their first batch of failures, as smaller competitors found they were unable to afford the financial burden of attracting riders through free rides and the cost of replacing stolen bikes.

Meanwhile, an umbrella-sharing startup found that almost all the approximately 30,000 umbrellas it made available to the public were stolen less than a month after the company launched the service.