By An Limin, Sun Wenjing, Wang Xiaoqing and Coco Feng 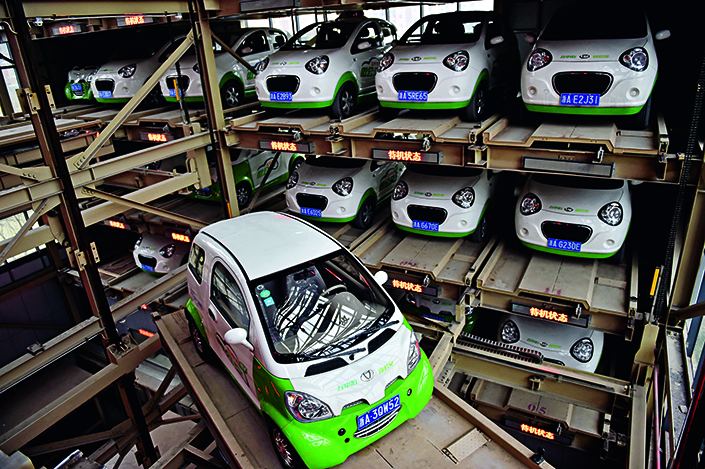 Although none of China’s car-sharing companies has turned a profit, Chinese automakers have been drawn to the business, which they see as a way to launch the unsold idea of electric vehicles on the domestic market. Above, a smart garage in Hangzhou, Zhejiang province, provides maintenance and charging service for electronic vehicles in January 2015. Photo: Visual China

(Beijing) — Shanghai resident Zhan Yufeng had a challenging morning last summer. He had to be at an important event at 7:30 a.m., but it was three hours’ drive from his home. The subway wasn’t open that early, and a taxi would cost more than 200 yuan ($30).

Then Zhan remembered EVCard, a car-sharing service that allows users to rent electric vehicles (EVs) by the hour, and costs 180 yuan per day, at most.

To use the service, Zhan downloaded a smartphone app, paid a deposit of 1,000 yuan, and unlocked a car from a nearby docking station. At the end of his drive, he parked the vehicle at another station close to his destination, without the need to return it. The self-service process was short and simple.

“The light vehicle, powered by electricity and without a gearshift, made me flexible on the road, like a dragon in the ocean,” Zhan said. “I managed to overtake [slower drivers] and easily climb up hills. I was even faster than a Porsche and a BMW when pulling away from intersections.”

Zhan reached the venue half an hour earlier than he planned — and it cost him 100 yuan less than a taxi.

Car-sharing businesses, like the one Zhan used, emerged in the West in the 1990s and didn’t enter China until over a decade later. There are now more than 100 firms, big and small, that provide car-sharing services in China, and the majority are carmakers that want to ride the tide of a sector still in its early stages.

Eighty percent of shared cars are owned by startups backed by automakers — including some foreign big names. Mercedes-Benz, for example, introduced its car2go brand in southwestern China’s Chongqing last year, and BMW plans to launch 100 shared cars under its ReachNow subsidiary in neighboring Chengdu in the third quarter of this year.

Yet, as of now, none of the car-sharing businesses in China has turned a profit, according to research by both PricewaterhouseCoopers and Roland Berger, the latter of which forecasted that the entire car-sharing industry in China will operate only 170,000 cars by 2020, while GE Motors estimated that auto sales will reach 30 million by then.

Despite the lack of profitability, the auto giants are continuing to join the field — not just for commercial reasons, but also due to regulatory developments.

Joe Pattinson, who heads BMW’s mobility services, including car2go, told Caixin that a car-sharing boom in China is just a matter of time.

A recent draft regulation in China proposes requiring all large car manufacturers to produce a certain proportion of new-energy vehicles, including both pure electric and hybrid models, and says the proportion of all output must grow annually over the next three years.

If the bill is passed, any car maker that fails to meet the EV quota must proportionally reduce its output of traditional fuel cars.

The move is part of China’s broader efforts to promote clean-energy transport and power sources in a bid to clean up the nation’s polluted air and develop cutting-edge technologies that can eventually be exported. As part of that push, China is aiming to reach annual new-energy car sales of 2 million by 2020.

This is an aggressive goal, as many Chinese consumers are not yet receptive to EVs, due to still-developing technological issues, such as battery-life, charging and acceleration limitations.

Thus, automakers see car-sharing as an ideal solution to launching the unsold idea of EVs to the domestic market, while also meeting the quota requirements.

Sharing economy is a big pie

The sharing economy has become a field in which early-comers have the best chance to become unicorns, as we’ve seen with Airbnb, Uber, Didi Chuxing — China’s dominant car-hailing firm — and the heated bike-sharing industry.

The booms in sharing-economy industries have inspired automakers to steer toward similar concepts, even though car-sharing has remained underdeveloped and profitless.

“Imagine the day when car-sharing merges with driverless cars. What would be the point of owning a car?” Guangzhou-based transport expert Su Kui told Caixin.

The evolution of so-called “disruptive technology” has made automakers nervous, because no one wants to be a hardware producer only. “Nowadays transport is all about service,” Su said.

In the future, cars will become similar to smartphones in that they will serve as platforms for services, and if a car company doesn’t shift its focus to services, it will become marginalized in the industry, said Liu Jinliang, vice president of automaker Geely Holding Group Co. Ltd., which launched car-sharing unit Weigongjiao in 2013.

The market appears large because there are a lot more people who have driver’s licenses than car owners. Consultancy Roland Berger estimated that in 2020, 355 million Chinese will be qualified to hit the road, while only 195 million individuals or households will own a car.

As technology advances, especially after 2030, when the driverless car sector is expected to reach maturity, car ownership will be gradually replaced by car sharing, said Roland Berger principal Ron Zheng.

Zheng estimates that by 2025, the number of shared cars may reach 600,000, which would replace up to 8% of privately owned cars. Before that era comes, however, operators must deal with the gap between high costs and low profits.

The problem of profitability

Moreover, insurers charge premiums that are 50% to 100% higher than for private car owners, as it is a new business model subject to evolving regulation, especially regarding accidents. In April, a shared car caused a road accident in Chengdu and the driver was found to have registered with his friend’s driver’s license instead of his own, which had been suspended due to excessive traffic violations. The case has yet to decide the share of responsibility for the defendant versus the car-share provider.

If a car-sharing business is to make money, its cars must be occupied by users for at least 4.8 hours per day, according to Roland Berger. But the current average utilization is 2.88 hours.

Uu co-founder Li Yu said that the car-sharing business model is “not yet mature.”

One of Li’s arguments is that the deposit that users pay, oftentimes a few hundred yuan, is much less than the value of the car itself. Uu once lost five cars in two months, Li said.

Some experts don’t expect the industry to balloon. Gu Dasong, a transport legislation scholar from Southeast University, said shared cars can only supplement public transportation, private vehicles and car-hailing services because they are not as convenient as private cars and not as cheap as public transportation.