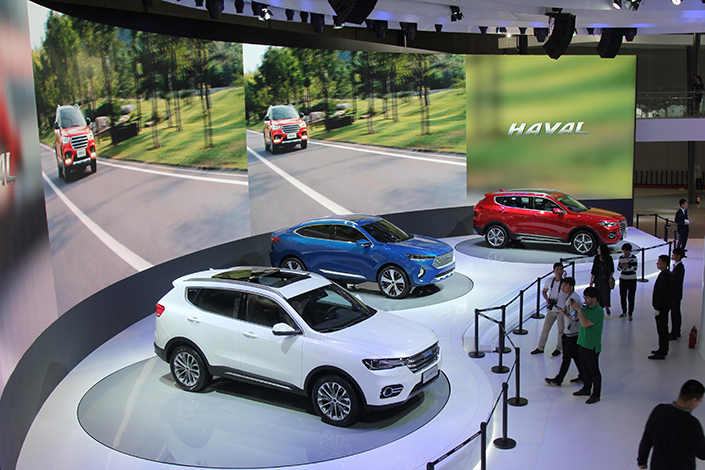 (Shanghai) – China’s luxury-car market is experiencing a shake-up, with Mercedes-Benz speeding past Audi to become the top seller in the first quarter of the year.

BMW AG, whose sales climbed 12.4% in the first quarter compared to the same period in 2016, ended up close behind Mercedes-Benz in second place in one of the world’s most important luxury-car markets. Audi fell to third place.

The three automakers claim most of the China luxury-car market, but the huge swings in sales — Audi’s fell by 20% — underscore how quickly Chinese brand preferences can change.

Jaguar Land Rover Automotive PLC, while far behind in terms of unit sales, saw a 107% gain in Jaguar sales in the period from a year before.

Dieter Zetsche, chairman of Daimler AG and head of its Mercedes-Benz cars division, said at the Shanghai Auto Show that China is now the brand’s largest market. The show started on Wednesday and continues through April 28.

The Mercedes-Benz S-Class series, launched four years ago, now sees 30% of its total global sales volume coming from China. Underscoring how important China has become, the automaker launched its latest flagship model Maybach S680 here, with a name that represents luck and fortune in Chinese culture.

Meanwhile, Audi has had to endure not only a sales slump but also distributor disputes. Its owner Volkswagen Group’s proposed tie-up plans with China’s SAIC Motor Corp. Ltd. has upset its longstanding sole partner FAW Group Corp. Management at the FAW-Volkswagen joint venture were said to be “furious” when they learned about the deal last November.

Dealership investors of FAW-Volkswagen Automobile Co. Ltd. also acted against it, demanding that the new partnership be suspended until Audi’s annual sales reach 1 million units — sales are currently only at 60% of that target.

Jochem Heizmann, president and CEO of Volkswagen Group China, said at the auto show that while negotiations with FAW and its distributors are not over, he expects fast progress in reaching an agreement.

Jaguar Land Rover is a relative latecomer to the China market, first driving in in 2010. As a luxury carmaker, it plans to strengthen its sales network in smaller third- and fourth-tier Chinese cities, said Murray Dietsch, the president of its China joint venture Chery Jaguar Land Rover Automotive Co. Ltd.

BMW is the first German automaker to step into the nascent car-sharing business. It will bring its latest project ReachNow to China soon, allowing users to rent a car via smartphone and leave it anywhere. The company will promote the service in the southwestern Chinese city of Chengdu in the second half of the year, said Ian Robertson, a member of the BMW board.

The emerging car-sharing service will be a fast-growing business in China. Consultancy Roland Berger estimated that the domestic market will increase by 45% each year over the next decade.