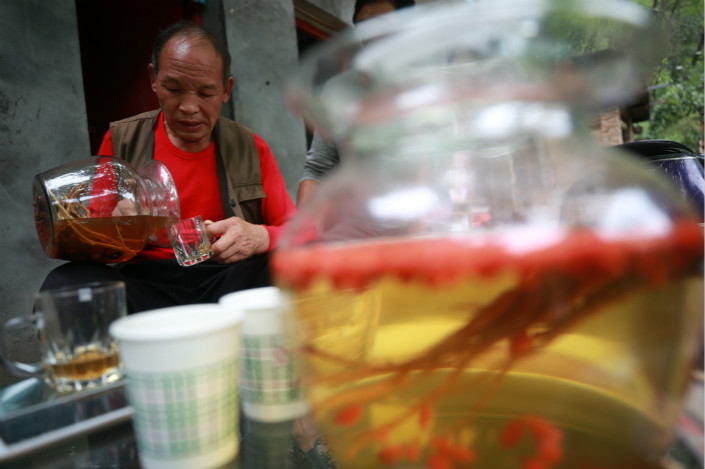 Chinese distiller Guizhou Dongjiu advertised that one of its brands of baijiu liquor is “antiseptic, antiviral, anti-cancer, anti-blood-clotting and can help reduce cholesterol” after a study suggested that its products have cancer-fighting properties. Photo: Visual China

A Chinese liquor-maker is facing accusations of illegally misleading consumers after it cited a study suggesting that its products have health benefits.

The study — published by Jiangnan University in eastern China — asserted that the Chinese liquor baijiu contains elements that can prevent cancer.

It added that distiller Guizhou Dongjiu Co. Ltd.’s particular brand of the spirit contained the largest amount of an anti-cancer chemical among 14 competitors.

On Monday, the company promoted the study on its website, adding that its baijiu is “antiseptic, antiviral, anti-cancer, anti-blood-clotting and can help reduce cholesterol.”

The claims provoked a backlash online and from China’s scientific community. Critics pointed out that the company’s interpretation of the findings was questionable at best.

Even if certain ingredients in baijiu are beneficial, it does not mean the liquor is healthy overall, said Yun Wuxin, a science writer and Ph.D. in food engineering.

Yun added that the health effects of an ingredient are often dependent on the amount consumed. For example, red wine contains the chemical resveratrol, which is recognized as having healthy properties. But one would have to consume more than 100 bottles of wines per day for the chemical have an effect, Yun said.

The study also seemed to overlook the fact that alcoholic beverages are labeled as “carcinogenic to humans” by the World Health Organization’s International Agency for Research on Cancer.

Furthermore, in China, it is illegal for companies outside of the drug and health care industries to claim that their products have health benefits, said Zhu Danpeng, a food and beverage industry analyst with the China Brand Research Institute.

It is unclear what, if any, punishment either Guizhou Dongjiu or Jiangnan University might face.

The liquor maker has experienced hard times financially over the past decade. In 2004, it halted production due to a cash crunch. In 2012, Beijing launched an anti-graft campaign that focused on bribery and gift-giving, which sent fear streaming through the baijiu industry. The next year, two investors in Guizhou Dongjiu put a combined 22% stake in the company up for sale.

The new study is actually the second Jiangnan University report that Guizhou Dongjiu has touted as evidence of its products’ benefits. A 2013 study claimed that baijiu contains four times more terpene — a compound with potential cancer-fighting effects — than there is in wine, and the distiller and the university collaborated on the research, the company said.

Although some evidence exists that wine contains chemicals that may help prevent cancer, the ethanol in the beverage does comparatively more harm, said wine expert Wang Jun from China Agriculture University’s College of Food Science and Nutritional Engineering. “If the distiller turns a study into a marketing campaign, they are simply giving alcoholics one more excuse to drink,” Wang said.

In 2002, leading Chinese baijiu brand Kweichow Moutai claimed its alcohol could protect the liver, citing two studies from the 1990s. But the professor who led the research, Cheng Mingliang, from the Affiliated Hospital of Guizhou Medical University, said that the company’s interpretation of his studies was misleading, according to state-backed online news portal ce.cn.