A Music Professor With a Mission 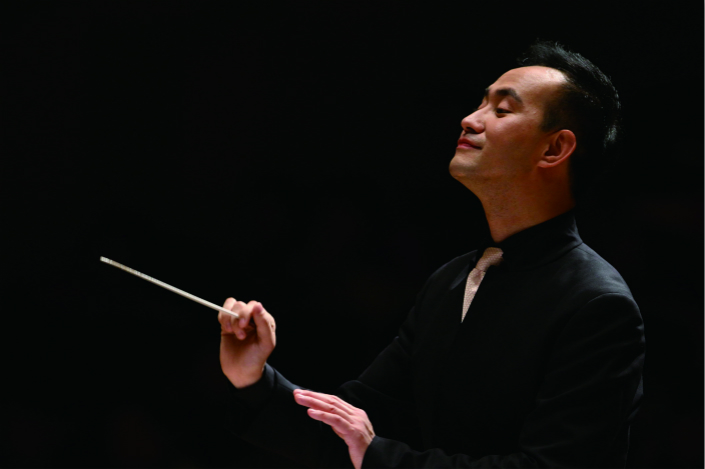 Bryan Minghui Bi, professor at the School of Arts at Peking University, has been involved in the Chinese Music Institute of Peking University (PKUCMI), a student association, since 2009. He has conducted several concerts of the institute’s traditional Chinese music orchestra. Photo provided by PKUCMI

Peking University (PKU) professor Bryan Minghui Bi is on a mission to make “music accessible to all” by putting less importance on the competitive grading system for players of instruments and by creating more opportunities for amateurs.

Bi’s career is also an example of how scholars trained in Western music can help bring traditional Chinese music to the world stage.

Bi graduated from the country’s top Central Conservatory of Music, studying piano, music pedagogy, ethnomusicology and Western music history. But for the past eight years he has led the Chinese Music Institute, a PKU student association, which brings traditional Chinese music to a global audience.

According to Bi, Western music advocates have at time discriminated against traditional Chinese music, though things have improved.

But the gap is gradually narrowing, he added. Generations of musicians have contributed to the development of Chinese music, through research into instruments, sound field and composition, especially after traditional performers learned to form orchestras based on Western philharmonic orchestras, Bi said.

However, domestic orchestras in both the Chinese and Western styles have been less visible on the global stage because music education in the country puts far more emphasis on solo performances, Bi said.

In China, music learners can have their solo skills graded by one of several conservatories, and extra marks are given to musically talented performers when they compete for a place in a good middle school or high school. Universities, including PKU, are also willing to overlook a spotty academic record of some talented students who can get admitted through auditions so they can join official orchestras that tour on behalf of the school.

But China’s tough grading system has made music education fiercely competitive, as opposed to making it something that everyone can enjoy, Bi said.

Bi was instrumental in establishing the orchestra at the Chinese Music Institute (PKUCMI), the country’s first student orchestra for classical Chinese music that doesn’t take these “grades” for performances into account.

The orchestra has grown quickly, starting from a dozen in 2009 to now more than 70 members. Together with other PKUCMI projects, the orchestra has contributed immensely to promoting traditional Chinese music, Bi said.

Bi spoke to Caixin about the need to explore the connection between Chinese and Western styles and why musicians need to have a cross-cultural understanding of music. The following are edited excerpts from the Chinese-language interview.

Caixin: Do Western music students in conservatories in China look down upon those who study classical Chinese music?

But it is more a personal preference than arrogance among the whole group, and equality has grown between the two sides. Many respectful musicians have set an example by lowering barriers. Notable pianist and music academic Yao Jinxin studied music in Germany and the U.S., but later shifted her research to focus on Chinese music. My teacher Zhong Zilin, who is a student of Yao, started with Chinese folk music, but later did research on modern Western music.

What are the major differences between Chinese and Western instrumental music?

Traditional Chinese music is linear, which has long served as an accompaniment to vocalists, while instruments in the west started to be independent from songs and explore opportunities for solo performances in the 17th and 18th centuries. Chinese music decorates lyrics. It is based on language, while Western music sets its foundation in mathematics.

When several instruments are brought together, the Chinese ones try to differentiate the sounds from each other through diversified timbres, or tone quality, while Western music seeks to fuse different sounds.

There is an ongoing debate on whether traditional Chinese music instruments can be used to form an orchestra. What are your views?

There have been debates. In history, these instruments were created for solo performances, or at most very small bands. They are not very stable, their production process isn’t standardized, and neither is the rehearsing and training system.

But, I personally think a traditional Chinese music orchestra still works, but it requires improving the instruments, and being creative about the way they are arranged on stage. In addition, there aren’t many symphony pieces that perfectly match the acoustic beauty of traditional instruments.

Do students of classical Chinese music lack training on how to perform as a group?

I don’t have data to prove it, but based on my impressions, yes. Teachers don’t give them specific lessons on the relationship between their instruments and the orchestra, while the “grading” system focuses on solo performances. When it comes to learning Western instruments, things might be better.

China has a very short history of orchestra, either the Western or the Chinese form. Today, even our most professional orchestras can’t compare with the top ones overseas. They lag behind in only in what music pieces they can perform and how they demonstrate it, but also in terms of official support and market demand. These have led to the lack of orchestral training in music education.

Why did you get involved with the Chinese Music Institute, and what progress have students there made in terms of promoting Chinese music?

At first I didn’t think that deeply. When some students came to ask for help, as a teacher I couldn’t say no and had to stick to my commitment. I also learned about some unfairness at PKU (the gap between the official orchestra and other so-called amateurs), and I wanted to change it.

PKUCMI members have set a good example in promoting traditional Chinese music. They have organized classes on several instruments for adult starters, and formed small teams to conduct research on whatever music issue they are interested in, hosting lectures and publishing articles on what they’ve discovered.

As the key department of PKUCMI, the orchestra has helped our student musicians perform. Besides the concerts we organize (about twice a year), we have for the past few years trained some student conductors.

This mindset is normal for a developing country like China where practical subjects such as computer science and mathematics are more popular, while music is a minor subject. But as the society evolves, people’s passion for art and culture will certainly grow. It is the responsibility of music teachers like us to be well-prepared for that era to arrive.

You’ve had many interactions with music communities overseas. Are there any good examples to show how other countries have protected their traditional music that have impressed you?

I’ll tell you two stories. I’ve been to Hungary many times. It is a small European country, but people there are generally excellent at performing, composing and appreciating music. One of the reasons is that they have two important musicians, Béla Bartók and Zoltán Kodály from a century ago. Both have composed world-renowned music and done research after studying Hungarian folk music.

I am working on a book for the Chinese on appreciating music, and have referred to similar books from the U.S. and the U.K. I found that the proportion of local music in their text books has largely increased. I myself have made efforts to imitate their approach and let my students grasp a cross-cultural understanding of music.