By Wang Qionghui and Leng Cheng 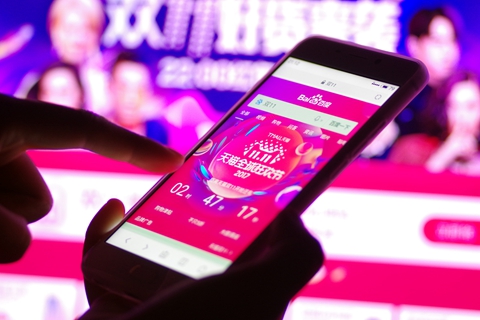 Over the sale’s first 24 hours on Saturday, Alibaba recorded 1.48 billion transactions from both its Taobao market place and Tmall brand store. It got off to rapid start, ringing up some $7 billion worth of goods sold in the first 30 minutes of the event. Photo: Visual China

China’s e-commerce giants smashed their “Double 11” record this year once again amid the country’s shopping frenzy, with Alibaba Group Holding Ltd. leading in sales and its rival JD.com catching up.

Sales of merchandise sold by Alibaba affiliated platforms hit $25.3 billion in 24 hours, a 40% surge from a year ago. JD.com, Alibaba’s major rival and the country’s second-largest e-commerce firm, also reported an impressive $19.1 billion yuan daily sales in this year’s festival.

Alibaba’s Tmall brand store started the “Double 11” event, or the so-called “Single’s Day” event, for its customers to feel less lonely. Now it has cemented itself as the world’s largest online shopping festival in terms of scale, with more sales than the U.S.’ “Black Friday” and “Cyber Monday” combined.

During the 24-hour period of Saturday, Alibaba recorded a total 1.48 billion transactions in both of its Taobao market place and Tmall brand store. It got a fast start with some $7 billion worth of goods sold in the first 30 minutes of the event.

JD.com also showed great momentum this year. The platform revealed its “Double 11” sales figures for the first time since Alibaba set up the event in 2009, and claimed to hit the 100 billion yuan ($15.1 billion) sellling mark an hour ahead of its rival.

JD.com, the second-largest online marketplace, previously only revealed percentage growth instead of data for the “Double 11” event.

In terms of merchandise, Alibaba kept its dominance over sales of apparels and cosmetics, but faced setbacks in the domestic appliances section.

A senior manager of one domestic appliance company told Caxin that some discounted merchandise listed on Alibaba’s e-commerce platform couldn’t be dispatched to consumers during the festival, as the discount deals failed to obtain the permission of its suppliers and thus dragged down the performance in its sales.

Sales of the top 10 brands of the section surged by 248% during the day, said Hu Shengli, vice president of JD.com. He described the performance of the platform as “beyond the words.”