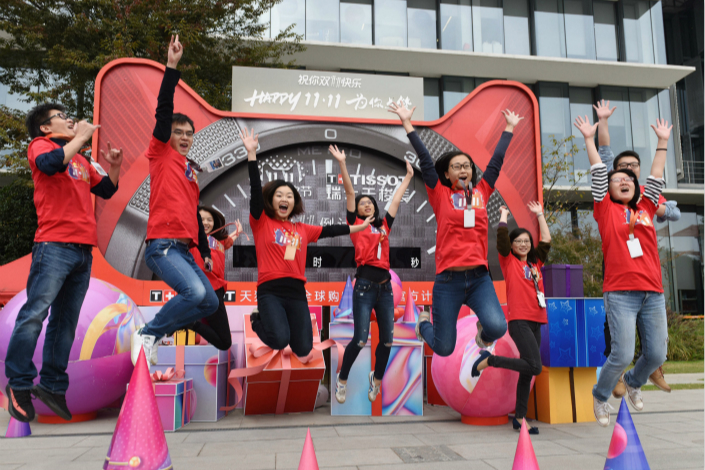 After Alibaba Group Holding Ltd. started the "Double 11" shopping event in 2009, its e-commerce rivals piggybacked on the Nov. 11 shopping event, offering discounts at about the same time. Above, workers at the Hangzhou headquarters of Alibaba's Tmall promote Double 11 on Friday. Photo: Visual China

For just under a decade, e-commerce giant Alibaba Group Holding Ltd. has turned its “Double 11” online shopping extravaganza, which kicks off as Friday becomes Saturday, into a national craze.

During the event — China’s answer to the U.S.’ “Black Friday” and “Cyber Monday” — 140,000 brands will offer discounts on 15 million products to half a billion consumers around the world during this year’s 24-hour sale, according to Alibaba.

Although the event was started by Alibaba in 2009, its e-commerce rivals, including major competitor JD.com Inc., later appropriated the idea, offering coupons and discounts around the same time. JD.com also started its own “6.18” sales event on June 18 every year to mark its anniversary — an event that Alibaba also muscled in on by offering its own discounts.

Since 2015, Alibaba has doubled down on its publicity for Double 11 by producing a televised gala on the night before the event. This year’s performance, which begins Friday evening, will feature celebrities that include Australian actress Nicole Kidman, Russian tennis star Maria Sharapova, and British singer Jessie J.

Why is the festival called Double 11?

The major parts of the event, the largest discounts and coupons offered, take place every Nov. 11, a date that contains a pair of 11s. But store managers on Alibaba’s Tmall and Taobao marketplaces usually start their marketing campaigns in late October. Many stores also continue to offer smaller discounts throughout November.

Before 2009, Nov. 11 was an unofficial holiday for single people, as it was the date in the year with the most 1s. People on that day held “anti-Valentine’s” or “jealous-of-those-in-love” celebrations by giving gifts to each other or themselves.

How popular is the Double 11 event?

Sales have hit new records every year for the past eight years. In 2015, the Double 11 event set a Guinness World Record with $14.3 billion for online sales revenue generated by a single company in 24 hours. The company broke its own record a year later, selling $17.8 billion worth of gross merchandise, far exceeding the $3.34 billion in sales rung up on Black Friday last year. Black Friday, the longtime biggest shopping day of the year in the U.S., takes place the day after Thanksgiving — the fourth Thursday in November.

Can people outside China join in?

Through an initiative started in June, 100 Chinese brands can sell globally. So far, the focus has been on Southeast Asia. Customers from 10 countries will receive free shipping for this year’s event.

Are the products really cheaper?

Consumers have complained that some online stores lifted prices before Double 11 in order to create the appearance of offering deep discounts. In 2015, the China Consumers Association in a report said that 30% of the goods it tracked involved this kind of “tricky discount.”

The Ministry of Commerce said before the 2016 Double 11 event that it would supervise the event, warning merchants against inflating prices or putting out misleading advertising.

In addition to pricing, regulators have also studied the authenticity of Alibaba’s record-breaking sales numbers. The company said in May 2016 that it was under investigation by the U.S. Securities and Exchange Commission over the accounting practices used for the data from the Double 11 event, but no update has been reported.

How has Double 11 worked out for the other big e-commerce companies?

U.S. e-commerce giant Amazon.com Inc. has also joined the festival this year, placing a bottom banner on its Chinese website, defining “11.11” as an “overseas shopping festival.”

JD.com has been in for a few years, but hasn’t revealed sales figures from that day. Last year, it only said that sales grew 59% from a year before, without giving the figure.

The battle among e-commerce platforms during Double 11 has never stopped. A week before the 2014 event, Alibaba sent out a note to several rivals, including JD.com, that it had registered “Double 11” as a trademark. The other online marketplaces had no choice but correct all their marketing materials to avoid the term. Even today, they still use “11.11” instead of “Double 11.”