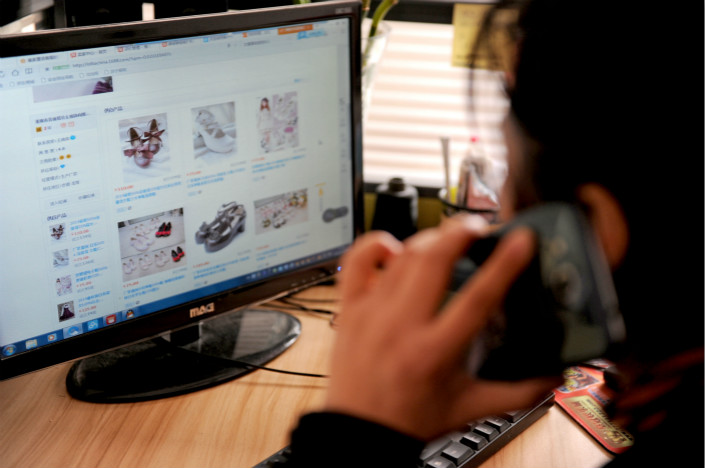 China has revised its Anti-Unfair Competition Law ahead of the Nov. 11 Singles’ Day online shopping spree. Business owners who hire people to give their products fake ratings online will face fines of up to 2 million yuan ($300,000). Photo: Visual China

Chinese websites that engage in unscrupulous activities such as paying for positive reviews and deleting negative feedback will face hefty fines and could have their business licenses revoked after the country’s top legislative body approved revisions to the law against unfair competition.

Violators will face fines of as much as 2 million yuan ($301,000) and could have their business licenses revoked, according to the full text of the law released by the National People’s Congress, China’s parliament, over the weekend. The amended legislation will take effect on Jan. 1.

“Proper online market competition is one of the highlights of the revision,” said Yang Hongcan, director of the division of anti-monopoly and anti-unfair competition law enforcement with the State Administration for Industry & Commerce. “The law will better regulate online shopping and maintain a fair market order,” he said at a briefing on Saturday.

The revisions were approved a week before the annual Nov. 11 Singles’ Day shopping frenzy that Alibaba created in 2009. Last year, the 24-hour marathon raked in almost $18 billion in gross merchandise volume — a measure of online sales — more than double the combined $6.8 billion spent online by Americans on Black Friday and Cyber Monday, the largest sales days in the U.S.

The original Anti-Unfair Competition Law was passed in 1993, well before the internet era. Although it outlawed false advertising and rumormongering aimed at damaging a competitor’s business reputation, there were no specific provisions covering unfair competition online, such as the practice of sellers paying for fake reviews of products offered on the internet, which has become a rampant problem in China.

It was not until 2015 that the State Administration for Industry & Commerce issued regulations that banned fake comments. The issue has become so pervasive that Taobao, the online consumer-to-consumer shopping platform of Chinese e-commerce giant Alibaba, now provides a guide for consumers to help them identify honest comments and ratings.

Other changes to the law include barring internet companies from using technology to influence users’ choices, such as forcing consumers to shut down or delete online products or services, such as security software, provided by legally by other firms. One of the biggest cases to hit the headlines was a fight in 2011 between Qihoo 360 Technology Co., a free anti-virus software provider, and Tencent Holdings Ltd., which runs the instant messaging platforms QQ and WeChat.

As commerce conducted over the internet has boomed, so have scandals involving unscrupulous marketing and sales tactics by businesses squeezed by increasingly fierce competition. A cottage industry has been spawned to provide such services to companies.

According to the Procuratorate Daily, the official newspaper of the state agency responsible for prosecutions and investigations, there were 680 websites and more than 500 instant messaging groups in 2014 offering to conduct fake transactions, leave positive comments on a client’s products and services and criticize those of its rivals. The combined value of such fabricated sales amounted to more than 600 billion yuan, the newspaper said.

In June, businessman Li Hanyu was given a jail sentence of five and a half years for fabricating transactions on Taobao, the newspaper said, describing it as the first case of its kind in China.

In December, Alibaba began legal proceedings against a company it accused of providing fake transactions for online retailers, the first such lawsuit by an e-commerce company, demanding 2.16 million yuan in compensation.