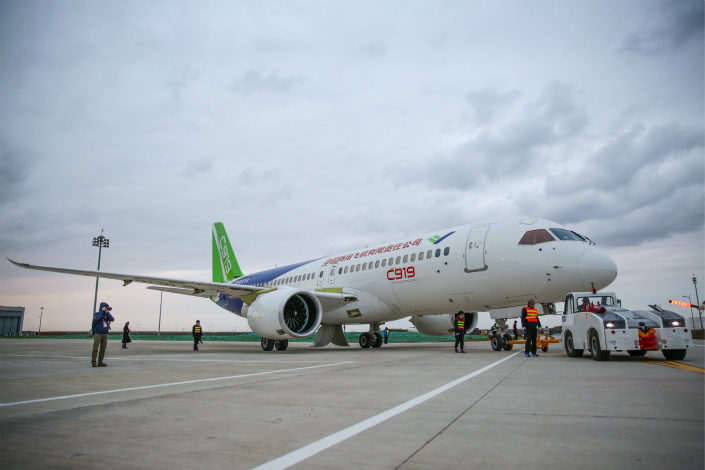 China has been in negotiations with the EU and the U.S. for years to get its aviation standards recognized by international regulators. The deals should make it easier for China’s domestically produced aircraft, such as Commercial Aircraft Corp. of China’s C919 (pictured), to be used outside the country. Photo: IC

China and the European Union have agreed to recognize each other’s aircraft product-safety standards, one month after Beijing inked a similar deal with the U.S.

The agreement, which will take effect by the end of 2018, was announced Monday by China’s civil aviation authority.

China has been in negotiations with the EU and the U.S. for years to get its aviation standards recognized by international regulators. The deals should make it easier for China’s domestically produced aircraft to be used outside the country.

“It’s a great coup and success for Beijing,” said Saj Ahmad of StrategicAero Research, a Europe-based consultancy. “The agreement between the EU and China will strengthen the Chinese aviation and aerospace sectors in terms of developing new airplanes.”

But it is unclear whether Chinese aircraft can be directly exported to Europe after approval from the Civil Aviation Administration of China (CAAC).

As with the China-U.S. deal, signatory countries can still request reviews on an individual basis. Beijing and the EU have “agreed to a general principle of reciprocity, but further negotiations will still be needed for a specific range of products,” said Xu Chaoqun, an official from the CAAC.

China has been working for years to break the aviation duopoly held by Boeing Co. and Airbus Group SE. This year it has scored several successes. In May, its homegrown passenger jet, the C919 — designed and constructed by state-owned Commercial Aircraft Corp. of China (COMAC) — made its maiden flight.

The C919 is currently undergoing an airworthiness certification review by the European Aviation Safety Agency. Experts said the new agreement could accelerate that process and give COMAC a boost to enter the European market.

“By conforming to European or Western aviation standards, it allows COMAC to better position its products to airlines in the EU, which would only otherwise look at Airbus A320s or Boeing 737s,” Ahmad said.

In September, COMAC said that the C919 had landed 130 new orders, bringing the total number to 730.

However, most of COMAC’s current clients are domestic airlines, with only 10% coming from overseas buyers, according to the company’s chief accountant, Tian Min.

But with the new deals, “cooperation on airplane certification and production standards will alleviate concerns for airlines because they know that the C919 and any other future Chinese-built airplane will be manufactured to the highest standards,” Ahmed said.