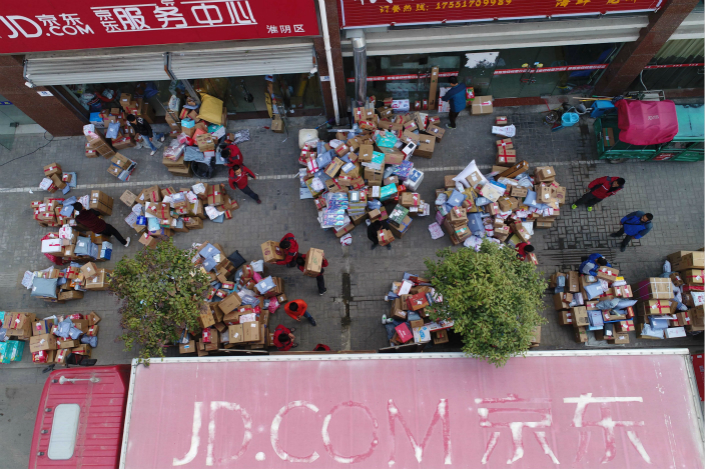 In the wake of the strong quarterly results, JD.com's Nasdaq-listed shares were up by as much as 6.66% in the first five minutes of trading. Photo: Visual China

Online retailer JD.com Inc. has reported its best ever quarterly results, even as it struggles to hold on to merchants that it claims are getting strong-armed by a rival e-commerce company.

JD.com reported a net profit of 1 billion yuan ($200 million), its highest ever for a single quarter, marking a turnaround from the 500 million yuan net loss that it reported for the same period last year. Its quarterly revenue rose 39% year-on-year to 83.7 billion yuan.

The better-than-expected results, announced before the market opened on Monday, helped drive Nasdaq-listed JD.com shares up as much as 6.66% to $42.62 in the first five minutes of trading.

Although its overall performance appeared promising in the latest quarter, JD.com experienced stagnant growth in the apparel category, Chief Financial Officer Sidney Huang acknowledged during an earnings call on Monday.

In July, JD.com and e-commerce site Vipshop Holdings Ltd. issued a statement that said some store managers were complaining that a “certain e-commerce company” had demanded an exclusive partnership, forcing them to abandon JD.com and Vipshop.

That company has “made use of its market dominance,” JD.com said, suggesting that the unnamed e-commerce company was Alibaba Group Holding Ltd.

JD.com founder and CEO Richard Qiangdong Liu said that more than 100 merchants have left JD.com due to the hardball tactics, though all were relatively small Chinese brands.

Some of the exclusive contracts that Alibaba sought were temporary deals for specific promotions, such as Alibaba’s “Double 11” online shopping extravaganza that took place on Nov. 11.

Merchandise sales on Alibaba platforms hit a record 168.2 billion yuan during the first 24 hours of this year’s Double 11 event. Alibaba started the event in 2009.

JD.com, which later appropriated the idea, for the first time revealed revenue figures for this time of year. It reported 127.1 billion yuan in sales during the first eleven days of November.

JD.com, which began as electronics retailer before it started selling many other kinds of goods such as books and home appliances, has always managed to overcome fierce competition in the past, Liu said.

JD.com has only about one-fifth to one-third the number of merchants that Alibaba has, Liu said, but it has worked very hard to help its merchants grow.

Liu said that the global brands that stayed on JD.com during the latest Double 11 event saw their sales grow more than 200%.

Still, JD.com could feel the impact of the strong-arm tactics for another two or three quarters, Huang said.