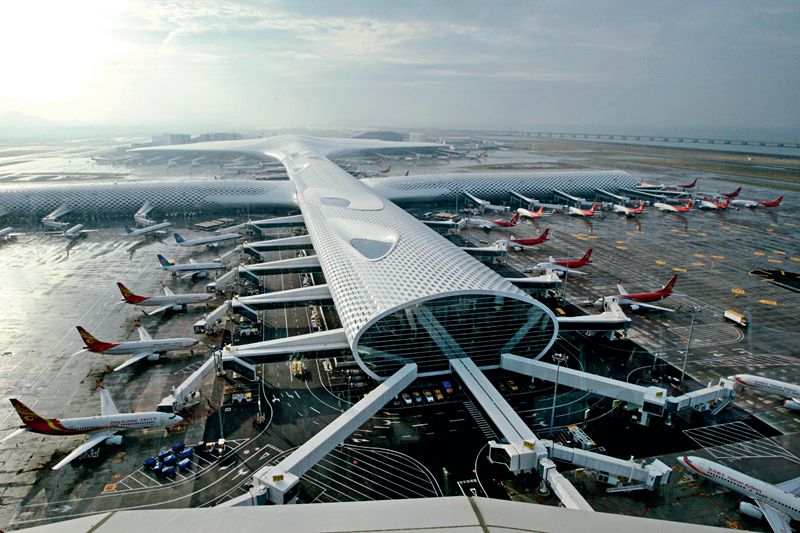 The Guangdong provincial government is studying the feasibility of merging the airports of the three largest cities under its jurisdiction — Guangzhou, Shenzhen and Zhuhai — to boost regional integration, but Shenzhen city officials are resisting the plan. Above, the new terminal of Shenzhen Baoan International Airport officially opened on Nov. 28, 2013. Photo: CNS

The Shenzhen government has for years wanted the city’s airport to expand into an international hub that connects the technology powerhouse with the rest of the world.

But a proposal put forth by Guangdong provincial authorities to consolidate the ownership of three airports may bring Shenzhen’s ambitions back down to earth.

Sources close to the matter said the provincial government is studying the feasibility of merging the airports of the three largest cities under its jurisdiction — Guangzhou, Shenzhen and Zhuhai — as part of efforts to boost regional integration.

Under the plan proposed by the Guangdong provincial State-Owned Assets Supervision & Administration Commission (Guangdong SASAC), the Guangdong Airport Authority (GAA), the state-backed owner of Guangzhou airport, would acquire major airport assets in nearby Shenzhen and Zhuhai. After the transactions, the provincial and three city governments would jointly own the GAA, which would operate all three airports.

An aviation policy analyst told Caixin that the Guangdong government is pushing the plan in a bid to better allocate resources, promote coordination and prevent competition among the three airports.

Through the merger, the provincial government wants to create a world-class aviation hub based at Baiyun International Airport in Guangzhou, the provincial capital, to better compete with cities such as Kunming and Chengdu, which have seen rapid air traffic growth in recent years, sources said.

However, the plan is strongly opposed by the Shenzhen government, which argues the merger may place Shenzhen Baoan International Airport, Guangdong’s second-largest airport after Guangzhou Baiyun, in an unfavorable position, sources said.

According to sources close to the matter, the Guangdong SASAC has suggested that international routes that are offered at Guangzhou Baiyun should no longer be offered in Shenzhen, which is just 140 kilometers (87 miles) away. Critics say the plan goes against Shenzhen’s ongoing efforts to better connect itself with the world.

The airports in Guangzhou, Shenzhen and Zhuhai are currently managed by different operators, all of which are wholly or partly owned by the cities’ respective governments. The merger would mean that local authorities would have less control over their city’s airport.

A Shenzhen government official said if the city were to relinquish control over Shenzhen Baoan, it would be difficult for the airport to compete with Guangzhou Baiyun to win resources like airspace and popular routes.

Pushing the mergers by administrative order rather than through the market is a setback to market-oriented reforms, the official said.

As one of China’s largest cities, one of only four first-tier cities and the home of tech giants like Tencent Holdings Ltd. and Huawei Technologies Co. Ltd., Shenzhen is widely known as an innovation powerhouse. But getting there by air has long been tricky.

Many visitors to Shenzhen have to take a one-hour bus or train ride into the city from Hong Kong because flying directly into Shenzhen from overseas is so expensive. For instance, a one-way ticket from Tokyo to Shenzhen is pricier than a round-trip flight between Tokyo and Hong Kong.

Shenzhen Baoan also offers fewer international routes than most other major cities, in part due to the city’s proximity to the long-standing aviation hubs of Hong Kong and Guangzhou.

The Shenzhen government’s push to boost international traffic at the city’s airport started last year, when the central government repositioned Shenzhen Baoan from a “regional gateway” to an “international aviation hub” in its 13th Five-Year Plan, which covered 2016 to 2020.

The city government has since offered subsidies and other incentives to encourage airlines to open new international routes in a bid to compete with Guangzhou and Hong Kong. A government document viewed by Caixin showed that starting this year, airline companies that operate at least two flights a week between Shenzhen and Australia will get a subsidy of 80 million yuan ($12.1 million) after one year of operations. The subsidy will be cut to 60 million yuan in the second year and 40 million yuan in the third year.

In 2016, direct flights from Europe, the U.S. and Australia landed in Shenzhen for the first time. A total of 12 new international routes started running at Shenzhen Baoan that year.

However, the regional airport merger plan may clip the wings of the city’s ambition.

Caixin learned from sources close to the matter that in June 2016, a Beijing-based think tank that specializes in urbanization launched studies on aviation reform in Guangdong, involving a possible merger of three local airports.

A source said the Guangdong provincial leadership is hoping to boost the local civil aviation industry and the capacity of Guangzhou Baiyun as the central government promotes integration in the region that includes Guangdong, Hong Kong and Macau.

As close neighbors, Guangzhou Baiyun and Shenzhen Baoan have seen competition heat up. An airline company source told Caixin that the two airports have been racing to launch new international routes and competing with each other for airspace, flight schedules and other resources.

Aviation experts said the Guangdong government is aiming to ease such competition to improve the efficiency of local aviation resource allocation, but the government-led merger is facing opposition.

At a July meeting held to discuss the proposed merger, Shenzhen officials rejected the plan and refused to hand over the city government’s ownership of the airport to the provincial government, a person close to the matter said.

An official at the Shenzhen State-Owned Asset Commission told Caixin that receiving direct international flights is key to the city’s plan to build up its international profile. The Shenzhen government has invested over 40 billion yuan in the airport over the years, said the official.

The top concern of the Shenzhen government is that the three airports would not be treated equally when it comes to resource allocation, and that Guangzhou Baiyun is likely to be given greater priority. “This is unacceptable to Shenzhen,” the official said.

Some scholars also oppose merging the airports in general. Zhou Shunbo, an expert at Shenzhen’s China Development Institute, said that better communication and coordination among local aviation regulators would do more to boost the efficiency of the region’s aviation resources.

Wang Zhiyong, a policy analyst at China Southern Airlines, told Caixin that amid the fast growth of air traffic in China, the total passenger turnover of the five airports in Guangdong, Hong Kong and Macau is expected to reach 200 million this year, indicating growing demand for both the Guangzhou and Shenzhen airports. The two cities can both become international aviation hubs amid this spiraling demand, Wang said.

Merging the airports may even do more bad than good, as government-led distribution of work is unlikely to be able to fit cities’ actual demands, an aviation expert said.