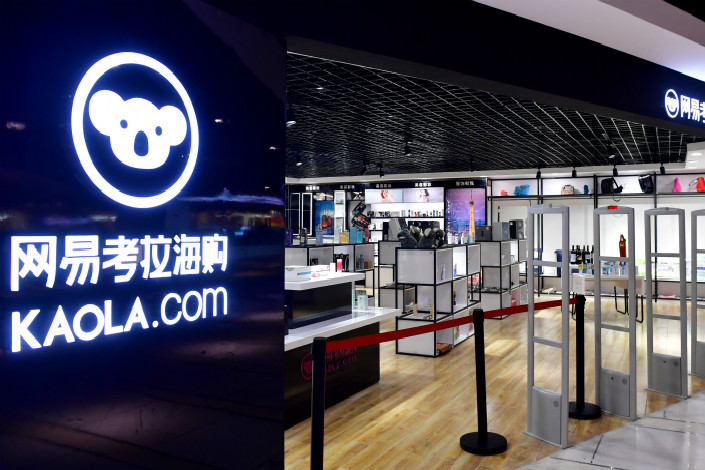 NetEase hopes to hit its latest cross-border e-commerce target by increasing the number of American brands sold on its Kaola website to around 3,000 by 2020. Currently, the platform sells goods from about 900 American brands. Photo: Visual China

Internet giant NetEase Inc. said it expects to purchase $3 billion worth of products from U.S. brands over the next three years, tapping growing demand from Chinese e-commerce buyers who prefer overseas goods to avoid safety and counterfeit issues often associated with local competitors.

China’s domestic e-commerce market is currently dominated by two companies, Alibaba Group Holding Ltd. and JD.com Inc., which control the lion’s share of sales. But cross-border e-commerce is less developed and more contested, leading domestic players like NetEase and global giants like Amazon.com Inc. and Wal-Mart Stores Inc. to vie more aggressively for a place at the table. At the same time, a new generation of middle-class Chinese are increasingly opting for such offshore products in the wake of food safety and counterfeiting scandals at home.

NetEase, better known as China’s No. 2 online game operator, said it will achieve its latest cross-border e-commerce target using its Kaola platform that specializes in such imports. The company is planning a major push for American brands on the site, aiming to raise the number to around 3,000 from the current 900 by 2020.

“As Chinese consumers become increasingly sophisticated, their focus has shifted from pricing concerns to a search for high-quality and reliable brands, as well as an enhanced and tailored user experience,” said Kaola CEO Lily Zhang. “With our unique insights into the needs of our customers, who are largely well-educated young women living in China’s major cities, we believe that we will be able to help them discover the exclusive American brands that speak to their individual style.”

To facilitate the anticipated big boost in imports to China, NetEase said it is building a new warehousing facility in the U.S. state of New Jersey, complementing its three existing ones in the New York City and Los Angeles areas. NetEase added Kaola targets higher-end buyers, with per-customer transaction value more than twice the average for China’s cross-border e-commerce sector.

The latest announcement comes about half a year after Kaola announced a similar target of buying 3 billion euros ($3.5 billion) worth of European products over the next three years.

After getting marginalized in domestic e-commerce by Alibaba and JD.com, Amazon has also found more recent success with cross-border business. The U.S. e-commerce giant boasts a respectable 6.6% share for that segment of China’s e-commerce market, placing it sixth behind Alibaba, whose imported-goods business controls about 19%, according to data released earlier this year by Analysys International.