By Zhang Yuanan and Yang Ge 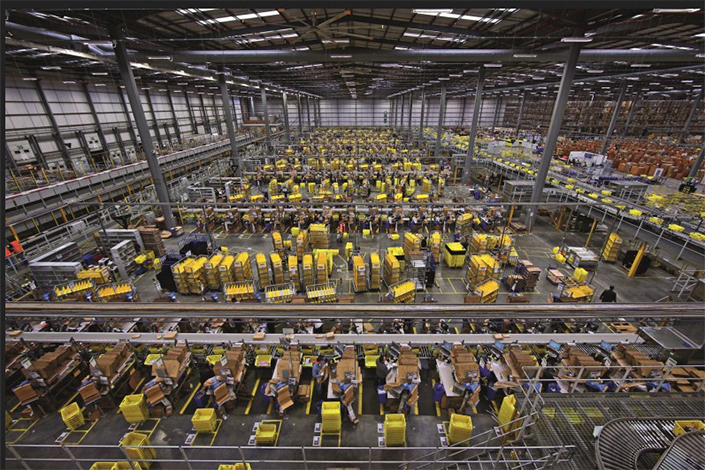 Amazon.com Inc. hopes to draw on its global strength, including its popular Prime loyalty program, to bolster its cross-border e-commerce business in China. Above, Amazon.com employees prepare for the Christmas shopping season in Hemel Hempstead, England, in December 2014. Photo: Visual China

A bustling logistics center in the San Francisco Bay-area city of Tracy is thousands of miles from China, but e-commerce giant Amazon.com Inc. hopes the sprawling facility can finally help it to crack an Asian market that is both huge but notoriously difficult for foreigners. The center, the size of 28 soccer fields and staffed by more than 3,000, is a constant beehive of activity, as thousands of orange-colored robots shuttle goods back and forth between shelves and the workers who fill customer orders.

Many of those goods are headed for China under Amazon’s 3-year-old program targeting a growing number of Chinese consumers who prefer imported products to locally produced ones. That market is sizable, boasting 41 million buyers last year and expected to nearly double to 78 million by 2018, according to market research firm iResearch. Cross-border purchases of imported goods in China were worth 95.7 billion yuan ($14.0 billion) in last year’s fourth quarter, up 14% from a year earlier, according to Analysys, another local market research firm.

Amazon.com currently boasts a respectable 6.6% share for that segment of China’s e-commerce market, placing it sixth behind industry leader Alibaba Group Holding Ltd., whose imported-goods business controls about 19%, according to Analysys. That’s a far smaller gap than in general e-commerce, where Amazon isn’t even an afterthought. The company has just 0.8% of the market, behind not only leaders Alibaba and JD.com Inc., but even far-lesser-known homegrown names like Gome and Vipshop.

Amazon is hoping to draw on its global strength, including its popular Prime loyalty program, to bolster its cross-border e-commerce business in a Chinese market where total online sales were worth $378 billion last year alone. To succeed, it acknowledges it will have to put hubris aside and do more to customize its products and services to local tastes — an approach that many foreign companies often eschew as they try to use their global formulas in the complex Chinese market.

“We hope to become the leader in cross-border e-commerce, regardless of whether it’s imports or exports,” said Elaine Chang, who was named Amazon’s China president after previously serving as head of its Kindle reader division in the market. One of her priorities will be to work harder to customize Amazon’s products and services to better suit Chinese tastes.

Unlike Western consumers, most Chinese have leapfrogged traditional retailing and been thrust directly into e-commerce over the last decade, the result of the country’s rapid transformation from a socialist country with no real retail culture to its current market-oriented, consumer-driving economy. That rapid transformation means that Chinese customers are often far more price-sensitive than their Western counterparts, and also much more willing to embrace new retailing models like e-commerce over shopping in traditional brick-and-mortar stores.

In her previous roles at Amazon over the last four years, two of Chang’s customization efforts for the China market included the rollout of a white-colored Kindle for local consumers, and the introduction of free shipping for cross-border purchases by local Amazon Prime members. Amazon rolled out the popular Prime program in China in October and is putting big hopes on the free-shipping provision for overseas orders worth more than 200 yuan to help keep the imports business growing.

Like many Western internet companies, Amazon arrived in China relatively early through a local acquisition and has been in the market for 13 years, making it far older than many current players. Over that time, its market share has eroded steadily, from 15.4% in 2008 to its current 0.8%. The pattern has become typical for many big Western names, which are frequently overtaken by smaller, younger domestic rivals that play by a different set of rules and know how to better cater to local tastes.

The road into China for foreign e-commerce firms is littered with similar failures and disappointing results. For example, one of the earliest arrivals to the market was online auctioneer eBay Inc., which entered China more than a decade ago through a large acquisition of the leading local player at the time. But the company fought a bloody battle with Alibaba and ultimately retreated from the market in defeat.

Other foreign players who have fought and lost similar battles include group-buying pioneer Groupon Inc. and leading Japanese e-commerce company Rakuten Inc. Groupon entered the market through a high-profile joint venture with local social networking giant Tencent Holdings Ltd. only to withdraw just a few years later without making an impact as part of a broader consolidation of the overheated market. Rakuten formed a similar e-commerce tie-up with local search leader Baidu Inc. only to abandon that effort a couple of years later after failing to gain traction.

While heads of other global tech titans like Apple Inc., Microsoft Corp. and even Google travel frequently to China, Amazon’s equally high-profile chief, Jeff Bezos, has made few publicized trips to the country. Some say his absence shows a broader lack of commitment despite Amazon’s large investment and dedication of other resources to the market. But even Bezos admitted at an event last year that Amazon’s disappointing China performance owes at least in part to its formula of simply copying its model from other major countries and failing to customize for local consumers.

By comparison, one of China’s biggest Western success stories in recent years has been Starbucks Corp., which has rolled out a highly customized approach that includes heavy emphasis on gift-giving and customer-loyalty promotions that are popular with local consumers. Amazon is hoping to partly imitate that approach with the Prime program, including the promise of cross-border deliveries in five to nine working days. Such shipments, which come to China mostly from warehouses in the U.S., Britain and Japan, would more typically take at least 10 days and sometimes as long as a month.

Despite the difficulties, early results for Amazon’s imports business are encouraging. The company revealed it has filled orders for 17 million items since launching the program in October 2014, and that sales from the program in this year’s first quarter were up elevenfold over the same period two years earlier.

Such import programs appeal to Chinese consumers who are often wary about the authenticity and safety of locally produced goods. That factor was thrust into the spotlight during a crisis about a decade ago, when the industrial chemical melamine was discovered in locally produced infant formula and other dairy products. Since then, food safety scandals have become a regular fixture in China, and imported and foreign-brand infant formulas remain popular options for new parents to this day.

But other products are also gaining popularity, and Amazon hopes to build on its existing selection of imported products as it attempts to make up for lost ground in China’s e-commerce wars.

“Eventually, we hope to make all of our products available to Chinese consumers through our imported products store,” said Greg Greeley, a company vice president at Amazon Prime. “But of course, we need to consider whether those products conform with Chinese laws and regulations.”