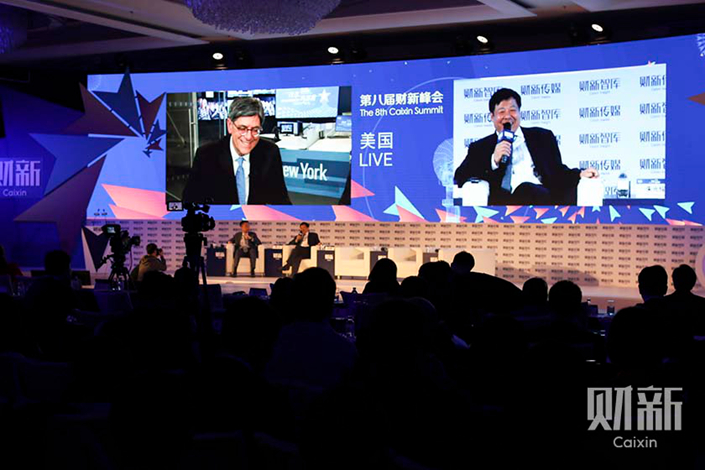 Former U.S. Treasury Secretary Jack Lew said Wednesday that China’s decision to allow foreign investors to take a 51% stake in financial companies was “an important move,” yet the government could do more to open up the sector. Above, Lew (left screen) and Chinese Finance Vice Minister Zhu Guangyao discuss Sino-U.S. economic cooperation via video links at the 8th Caixin Summit in Beijing on Wednesday. Photo: Caixin

Lew spoke at the 8th Caixin Summit in Beijing via a video link from New York City.

“It’s very important that the exchange rate not be an issue of tension between our countries,” Lew said.

“The exchange rate has moved to be a much more market-oriented frame. Even in this administration of the United States, it’s been recognized that the progress has been made. That’s very important. That is something that creates stability in the relationship.”

Lew, who headed the U.S. Treasury Department from February 2013 until Donald Trump assumed the presidency on Jan. 20, also said that China’s recent decision to allow foreign investors to take a 51% stake in financial companies in the country was “an important move,” yet the government can do more to open up the sector.

Progress has been made in China’s foreign investment policies, but changes in this sector have been “a bit slower” than Beijing’s relaxation of controls over its foreign exchange rate, Lew said.

“But in the United States, foreign investment can own 100% of a (financial) firm, and it’s still not on parity with what the foreign direct investment opportunities are in other countries,” he said, adding that the U.S. hopes Beijing’s latest move to open up the financial sector will prove to be “very real.”

Jack Lew said he is pleased about China’s continued commitment to sticking with the reform program as reflected in the Communist Party’s 19th Party Congress report. He also said he is glad reformers were placed in “significant places of authority” after the leadership shuffle during the recent party congress.