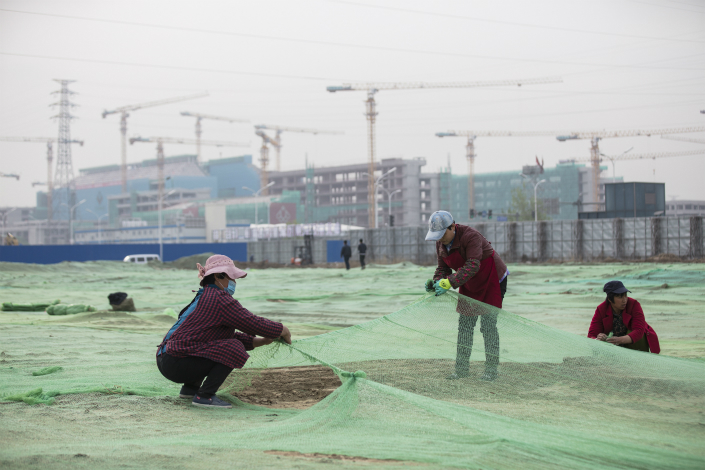 Of the 9.25 million square meters (99.5 million square feet) of Beijing housing approved this year, 35% have been designated as “price-capped housing,” 28% as shared-ownership homes and 10% as for rental. That ratio is up from a combined 55% of the total last year. Above, construction workers in the city cover the ground to stop dust from being blown around. Photo: Visual China

China’s capital has boosted the amount of land available for residential housing to its highest point in three years as part of efforts to rein in prices by increasing supply, a new report shows.

That’s almost four times the 1.36 million square meters auctioned in the full year of 2016 and the most since 2014, Centaline data showed.

The government has approved the construction of 9.25 million square meters of housing to be built on the land up for auction this year, the highest since 2013, and more than triple the amount in 2016, according to the Centaline report.

“The sharp increase in Beijing’s land supply this year will likely lead to a spike in the supply of new homes over the next two to three years, which will help stabilize the market and housing prices,” Yang Hongxu, deputy director of the Shanghai-based E-house China R&D Institute, a real estate services provider.

But there are strings attached that may make the land less attractive to developers.

The central government has ordered big cities like Beijing to provide more affordable housing as surging prices have put owning a home out of the reach of millions of ordinary people.

In response, the capital city’s government has imposed conditions on most of the land auctioned. Successful developers will be required to build less expensive housing that is subject to sales price caps set by the government, or apartments whose ownership is shared between the purchaser and the local authority — a program rolled out in the city at the end of September aimed at lowering the cost of owning a home.

In total, roughly three-quarters of the projects will be subject to controls — around 35% have been designated as “price-capped housing,” 28% as shared-ownership homes and another 10% as properties for rent. That ratio is up from a combined 55% of the total last year.

The controls imposed by the Beijing government have contributed to a cooling in developers’ enthusiasm for bidding at land auctions because of the likely squeeze on their profit margins.

The premium paid on land for residential property development in Beijing so far this year averaged 26% above the reserve price set by the government at auction. But in the first 20 days of November, the premium was only 8%, according to Centaline’s figures.

Data from real-estate brokerage 5i5j showed that the average premium paid on land auctioned for housing in China’s four first-tier cities of Beijing, Shanghai, Guangzhou and Shenzhen was 19.04% so far this year, the lowest in six years.

Hu Jinghui, vice president of 5i5j, attributed the decline in premium rates in Beijing to government-set conditions attached to the land, such as price caps on future sales of homes and the requirement for developers to retain ownership of the development so that they can only rent the apartments.

“In addition (to those criteria), the increase in this year’s land supply has been mainly for the purpose of building shared-ownership properties,” he said. “Developers are not too keen on grabbing them as the profit margins are low.”

Guo Yi, marketing director at Yahao, a real-estate consultancy in Beijing, also noted that higher reserve prices set by the government on the land being auctioned may also have contributed to the decline in premium rates.