Apple Hangs Up on Skype in China 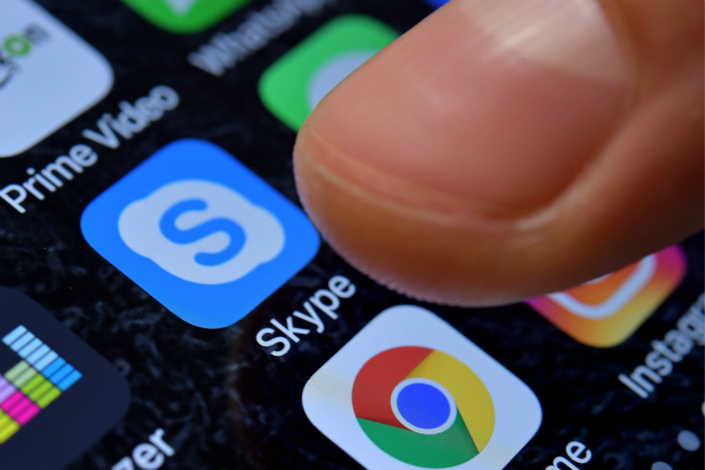 A media analyst told Caixin that the action against Skype is a "small yet unfortunate retreat from China’s aspirations for a more globalized society.” Photo: Visual China

High-tech giant Apple Inc. has removed the popular Skype voice and instant messaging service from its China app store after being informed it violated local rules, extending a recent string of similar actions by Beijing against offshore-based messaging and telecoms services.

A general version of Skype was no longer available on Apple’s China app store on Wednesday, though a business version was still present. Skype was also still available for download in China from its own website. The popular app, which provides a low-cost telephone-like service for internet users, was also removed from other Chinese app stores on orders from China’s telecoms regulator, according to media reports.

“We have been notified by the Ministry of Public Security that a number of VoIP (voice over internet protocol) apps do not comply with local law, therefore these apps have been removed from the App Store in China,” an Apple spokeswoman said. “These apps remain available in all other markets where they do business.”

A spokeswoman from Microsoft, which owns Skype, had no comment on the situation.

China has also taken steps this year to tighten control over virtual private networks (VPNs), which people inside the country often use to get around websites that are locally blocked. That tightening saw Apple remove all VPNs from its China app store in July, a month after one of the nation’s most popular homegrown VPNs also closed down on orders from regulators.

China worries that such services could be used by terrorists and other criminals who can remain anonymous due to the lack of real-name registration requirements. Since such services are based offshore, they also store their user data in servers outside China, which makes such information inaccessible to Chinese investigators.

“To no one’s great surprise, China’s public security bureau has decreed the removal of Skype from domestic app stores,” said Brock Silvers, managing director and media analyst at Kaiyuan Capital. “While this is a rational continuation of recent Chinese policies targeting internet privacy in the name of enhanced social order and security, it is also a small yet unfortunate retreat from China’s aspirations for a more globalized society.”