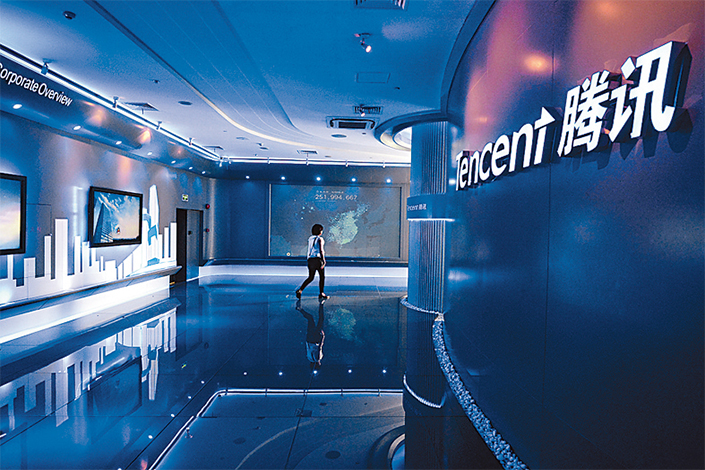 Tencent Holdings Ltd. and Chinese internet rival Alibaba Group Holding Ltd. both zoomed into the global top 10 this year, as shares of the pair soared on bullishness about their growth prospects.Photo: IC

Both companies have current market values of about $520 billion, making them the world’s fifth and sixth biggest publicly listed firms by market capitalization, according to Bloomberg data. Tencent briefly passed Facebook in value on Tuesday, but then gave back the title on Wednesday, when the former was worth $511 billion versus $521 billion for the latter.

Tencent and Chinese internet rival Alibaba Group Holding Ltd. both zoomed into the global top 10 this year, as shares of the pair soared on bullishness about their growth prospects. Despite their huge size, each company consistently posts solid double-digit growth both in terms of profits and revenue, as they consolidate their leading positions in e-commerce for Alibaba and online gaming for Tencent.

Tencent’s shares have more than doubled this year, while Alibaba’s have risen by about 90%. Alibaba is now the world’s seventh largest company, with a market value of $481 billion, according to Bloomberg.

Tencent’s latest surge has also put it within range of U.S. e-commerce giant Amazon.com Inc., which is the world’s fourth largest company with a current market value of $543 billion. But its current value is still well below the world’s three largest firms, Apple Inc., Google parent Alphabet Inc. and Microsoft Corp., which had respective market values of $873 billion, $713 billion and $637 billion.

The Chinese companies have risen to prominence by banking on the world’s largest internet market, whose users numbered 730 million by the end of last year, according to government data. China’s more recent development of a market economy has also made the internet more lucrative there than developed Western markets, since Chinese consumers go online for many more retailing, entertainment and other paid functions than their counterparts in the West where older traditional channels are still popular.