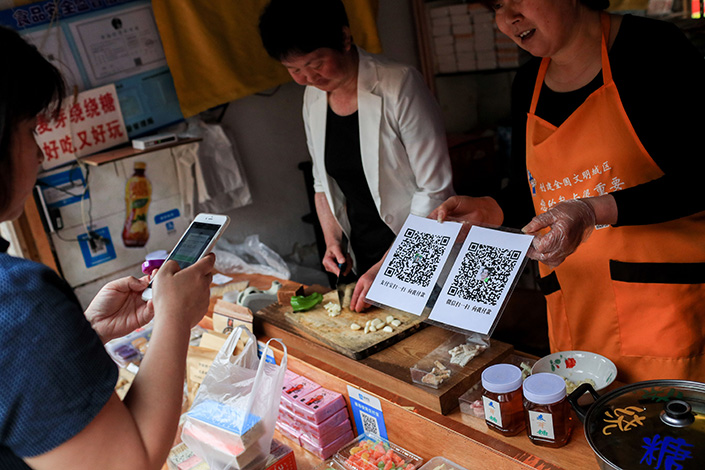 Alibaba Group Holding Ltd. regained bragging rights as the most valuable company in China on Friday, as rosy growth forecasts gave its stock price its biggest boost in over a year. Above, a customer pays by scanning QR codes in Shanghai on May 15. Photo: IC

(Beijing) — Alibaba regained the crown as the most valuable company in China on Friday, as rosy growth forecasts gave its stock price its biggest boost in over a year.

The management of Alibaba Group Holding Ltd. projected at the e-commerce company’s annual Investor Day event in Hangzhou on Thursday that revenues will expand by 45% to 49% this year, a target that beats analyst expectations by 10%.

Company management is confident that the goal is within grasp as users spend more time and money on its gamut of services.

Alibaba now has an equity value of over $355 billion, after the bullish expectations boosted the company stock by 13% on Thursday. Alibaba now narrowly leads Tencent Holdings Ltd., its Shenzhen-based rival in several business areas, which has a value of $343 billion.

Revenues grew 56% in 2016, including those of Lazada, the Southeast Asian e-commerce platform whose earnings have been consolidated into Alibaba’s financials as of April 2016. Income from Lazada apart, the revenue increase would be closer to 45% for 2016, higher than the 36% growth projected a year ago.

Alibaba’s share price has been making a steady ascent since the November Singles’ Day shopping festival, a nationwide online spending event Alibaba created to help merchants clear inventory and which has become a gauge of the growing heft of e-commerce in national consumption.

The company’s value has climbed by nearly 75% since late 2016, with Thursday’s hike accounting for a significant portion of the increase.

With an additional $10 billion in free cash flow generated last year, Alibaba plans to move ahead in gaining market share in business to consumer e-commerce (B2C), said company’s Chief Financial Officer Maggie Wu at the group’s headquarters in Hangzhou. “This is a company that always invests for the longer term, for the future,” she said.

Alibaba is hoping to broaden its edge over JD.com, a fierce rival in B2C online retail that had 26% of the market in 2016 while Alibaba’s Tmall controlled 57%, according to a report by Beijing-based consultancy Analysys in May. Tencent, which has competing payment, cloud computing and entertainment units, is the largest stakeholder in JD.com.