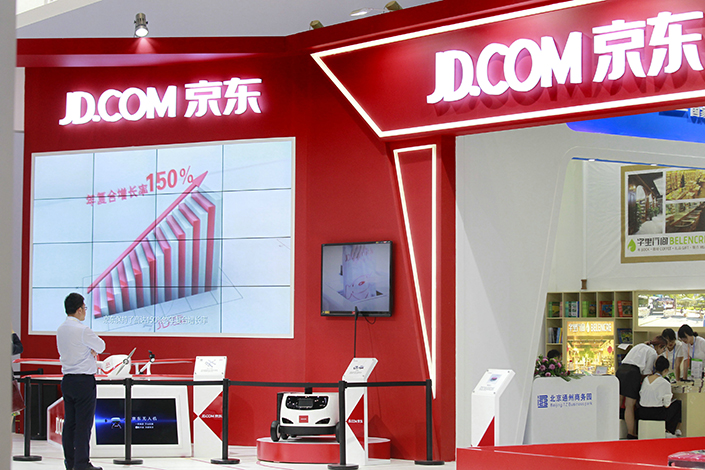 A JD.com booth at the 2017 Beijing International Service Trade Fair in Beijing, on May 31. The company is closing its Kumai platform for trading used goods. Photo: Visual China

(Beijing) – Challenged by rival Alibaba, JD.com has tried, and again failed, in creating an online platform for used goods, as the e-commerce giant shutters yet another short-lived secondhand trading site.

Kumai, a little-known used-goods marketplace under JD.com, has notified users that it will be closing shop in two months, due to a “business model transition,” marking the end of JD’s four-month attempt to set up a competitor to Xianyu, the largest secondhand platform in China, owned by Alibaba.

The eminent closure of Kumai was evidenced by the paltry number of items for sale on the site as of late. In many categories, only around 200 or so products are being sold. Listings of used phones and other more valuable consumer electronics, which tend to drive more traffic, have been transferred to another second hand market for quality used goods, 2.jd.com. It was unclear if the company plans to push 2.jd.com as a replacement for Kumai.

The Kumai closure will mark a second false start by China’s online retail giant to establish a used goods platform.

JD acquired Tencent’s dormant consumer-to-consumer (C2C) marketplace Paipai in 2014 as part of a strategic partnership between the two, and secondhand sales and special discount deals eventually grew to become a major segment of Paipai’s business, in an uphill battle against C2C titan Alibaba.

But Paipai and its secondhand division were shuttered last April, as JD citied futile efforts to crack down on counterfeits, which tend to run rampant on C2C websites that lack sufficient resources to root out pirated merchandise.

The online marketplace for used goods in China, as with most areas of e-commerce, is dominated by Alibaba.

Xianyu, a homophone for “spare and unused,” is the most widely used secondhand trading app, with about 15 million monthly active users, while Zhuanzhuan, the highly promoted used-goods marketplace under company 58.com – China’s largest classified information site – follows next with 8 million users.

The remainder of the market is highly fragmented, with no other company claiming more than 200,000 visits each month, according to data from Analysys, a Beijing-based consultancy.