By Sun Wenjing and Dong Tongjian 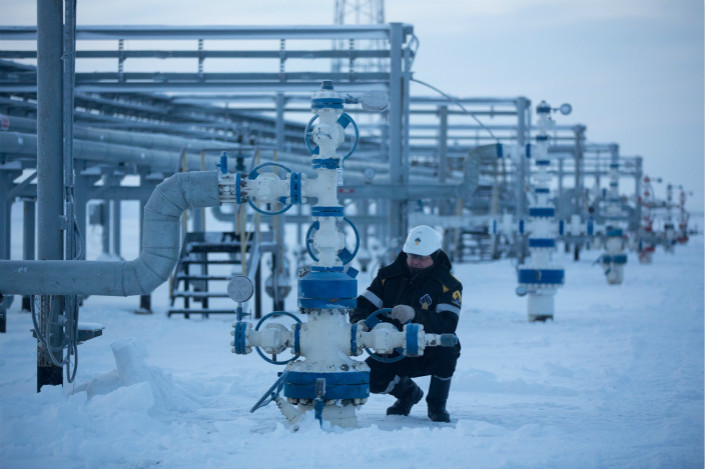 PwC's Andrew Li noted that M&As with “strategic significance,” such as those in the energy sector, remained stable this year because deals were still “encouraged by the government” and “welcomed by the market.” Above, an oil worker turns a control wheel in a field operated by Rosneft in East Siberia. China Huaxin Energy is buying a 14.16% stake in the company for $9.1 billion. Photo Visual China

China’s overseas mergers and acquisitions slumped in the first nine months of 2017 amid tighter government regulation, increased scrutiny of cross-border corporate activity by other countries, and a more uncertain global environment, a new report by professional services firm PwC shows.

The number of M&A agreements inked by Chinese companies fell by 14.8% compared with a year earlier to 572 while the combined value of the deals dropped by 38.9% to $97.7 billion, the firm said. The decline follows a record spending spree in 2016 which saw an almost 300% surge in the value of transactions to $214.9 billion for the full year.

PwC attributed the decline in activity to three main factors — the Chinese government’s “influential policy guidance” and other regulations governing companies’ overseas investment, increased scrutiny by foreign governments of proposed takeovers especially in the technology industry, and uncertainties in the global economy.

“The year of 2017 is proving to be a period of adjustment for China’s overseas M&As,” said Andrew Li, the head of China deals at PwC. “Looking ahead, as the reform of the supply side deepens, in light of China’s industrial upgrading and the guidance related to the ‘Belt and Road’ initiative, overseas M&As should stay active as enterprises mull making strategic developments.”

The State Council, China’s cabinet, issued new guidelines in August on corporate overseas investment after concerns grew that many of the deals were wasteful or were being done mainly to siphon capital illicitly out of the country. There were also fears that the spending was adding to already high corporate debt levels that could pose a systemic risk to the economy.

Explicit restrictions were imposed on acquisitions in industries such as real estate and entertainment. But at the same time, the government encouraged outbound investment in infrastructure projects under President Xi Jinping’s ambitious Belt and Road initiative, and in other sectors that would help Chinese companies upgrade their technology and manufacturing capabilities.

Li noted that M&As with “strategic significance” remained stable this year because deals were still “encouraged by the government” and “welcomed by the market.”

In the wake of the Chinese government’s new regulations and the growing momentum of the Belt and Road initiative, the focus of M&A deals this year has been in the energy, electricity and logistics industries, PwC said. Most of the high-value M&A activity in the first three quarters was in those three sectors and there were 21 deals with a value of at least $1 billion each, it said.

Governments in Europe, the U.S. and even India have also stepped up scrutiny of foreign acquisitions. Lawyers representing Chinese buyers told Caixin in August that the review process by U.S. regulators of proposed deals has been protracted for reasons that included concerns over growing Chinese interest in the “sensitive” technology sector.

The PwC report showed that the share of overseas M&A by Chinese companies in Europe and the U.S. fell to 50% of total investment in the first nine months from 77% in the whole of 2016.

Privately owned companies accounted for the bulk of the overseas deals, clinching 359 acquisitions in the first nine months of the year, 63% of the total, while those dominated by financial investors rose to 135, a record high 24% of the total, according to the PwC report.