Dislocated Migrant Workers Left in Cold and Confusion in Beijing 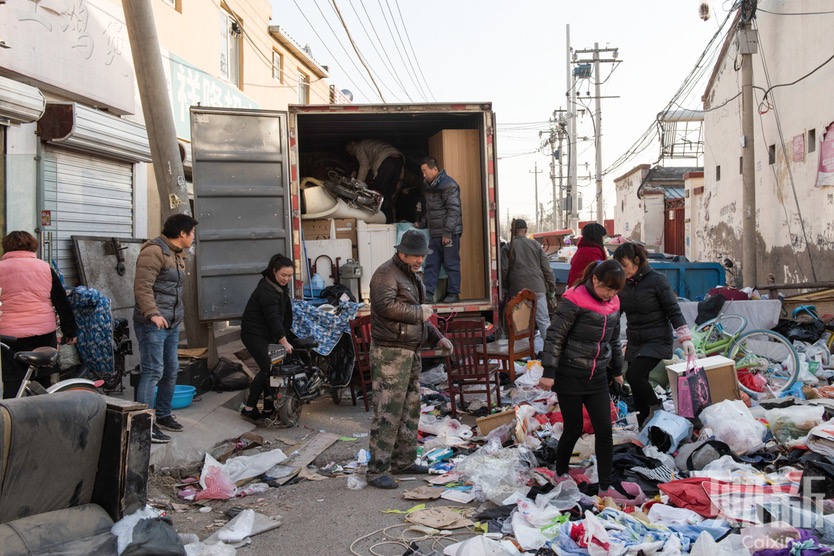 Tenants in a village in Daxing district in southern Beijing load their belonging into a truck on Friday after local authorities started to close overcrowded rental housing following a deadly fire a week ago. Photo: Xu Weichao/ Caixin

Yan Zhiqi, a 37-year-old man from Northeast China, left his friend’s dorm rented by a clothing plant in southern Beijing on Saturday morning after learning the unregistered plant is also affected by a deadly fire nearby and has to be relocated out of Beijing.

Local governments launched a 40-day campaign to inspect buildings unlawfully mixed with residential and industrial facilities, or those overcrowded apartments after the fire killed 19 migrant workers and their family members living in the residential compound, Jufuyuan, which also has a refrigerated underground storehouse.

Many tenants who shared crowded cheap apartments in the suburban areas of Daxing district have been forced to move out in the past few days. The campaign has been expanding to other areas of Beijing.

Yan spent one night in a motel, a few nights in a heatless spa center and two nights at his friend’s dorm after evacuating from his own rented apartment following the deadly fire in the neighboring building on Nov. 18.

Yan said his friend at the clothing plant is luckier than him, as the friend had at least half a day to move away all his belongings in the apartment, and was refunded part of his rent. When Yan left his own rented place, Jiyuan Apartment, during the fire, he left most of his belongings there. He was only allowed to go back to claim some of his things for an hour on Thursday accompanied by police, and had to left again.

He was still frightened by the fire on Nov. 18.

“I was lying on my bed on Nov. 18 evening before the fire broke out, thinking about what I should eat for dinner,” Yan told Caixin. Then he saw black smoke coming out of the bedside, and heard someone shouting “run!” He jumped out of bed, put on slippers, and ran out the door. He turned back again to grab a coat, and ran out of the building.

More than 200 residential households evacuated Jiyuan Apartment and had to find temporary places to live or have become homeless. The building adjacent to Jufuyuan, which housed more than 300 households before the fire, has also been sealed off.

The clean-up campaign is not limited to these two buildings. Many rental apartments, small hotels, restaurants, stores and other businesses around the area have been ordered to shut down. In fact, local authorities have been pushing for this campaign before the fire. The two apartment buildings involved in the Nov. 18 fire were already slated for demolished soon, as part of Beijing’s drive to phase out “low-end” industrial and business clusters. The fire triggered an acceleration of the drive.