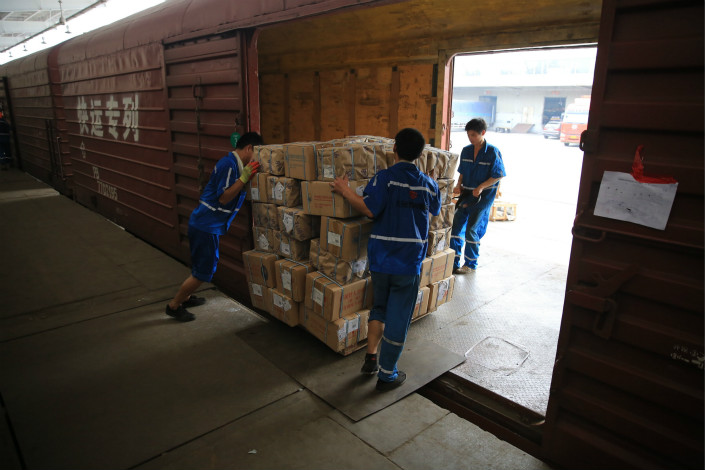 Express delivery companies have informed customers in Beijing that deliveries could be late after local authorities launched a 40-day series of safety inspections throughout the capital following a deadly fire that left 19 people dead. Photo: Visual China

Delivery firms have warned that Beijingers might have to wait longer for their packages, as city government safety checks following a fire that killed 19 people — including eight children — may affect their warehouses and drivers.

Couriers including ZTO Express and STO Express on Wednesday informed users that the efficiency of delivery services will be influenced as the authorities started a 40-day safety check throughout the capital on Monday.

The inspection, launched by the Beijing Administration of Work Safety, follows a fire in suburban Daxing district on Saturday that “caused serious deaths and injuries,” the administration said in a statement.

The blaze scorched through a crowded apartment that was home to many migrant families that lacked proper fire-control equipment. The authorities announced Thursday that the blaze was sparked in an underground refrigerated storehouse and that the unlicensed workers who installed the wiring have been arrested.

Some of the landlords of these warehouses obtained safety certificates through “special channels,” as regulation over such issues has been loose in the past, Huang said.

Couriers that have not publicly commented have also been affected. Some smaller distribution centers have been forced to shut down. A few companies have been told not to allow delivery drivers to charge their electric scooters in warehouses, while others firms have started to look for new buildings, said Wang Fei, founder of Lian Zong Cloud Warehouse.

A deliveryman from Yunda Express told Caixin that it has stopped accepting deliveries within Beijing. A ZTO deliveryman said that he is worried about losing his residence as his room and the warehouse it is attached to are being inspected.

This latest inspection came as China’s central government undertakes a massive campaign to cap the capital’s population and move parts of its less-vital functions to outlying areas. A significant proportion of those who work in such industries are migrant workers, including deliverymen.

As part of the campaign, numerous facilities important to migrant families have been ordered to close in recent years — including factories, wholesale and retail markets, street-front shops and even schools for migrant children.

Huang said that this process might make delivery services more expensive in future.