By Li Rongde and Yuan Suwen 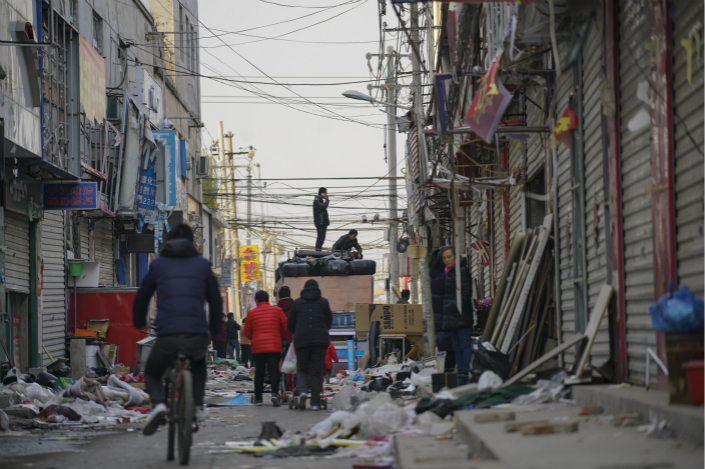 Pictures and videos of migrant families traveling around the city, desperately trying to find a place to stay in the middle of winter, have sparked an outpouring of support online, with individuals and NGOs offering temporary shelter and information on rental homes. Photo: Caixin

In a rare move, two major state-run news outlets have expressed veiled disapproval of a recent Beijing government crackdown on unlicensed buildings, which has forced thousands to leave their homes within two or three days of receiving notice.

The capital’s swift campaign comes after a fatal fire on Nov. 18 killed 19 at a residential-industrial compound in the south Beijing suburb of Daxing. Most tenants affected by the campaign are low-income migrant workers.

In a commentary it published on social media platform WeChat Sunday, China Central Television（CCTV）said that while such a campaign should be “implemented with force,” officials should also demonstrate “a degree of warmth or compassion” towards the affected communities.

“It’s true that safety risks could be lowered dramatically by pushing tenants to move out of their fire-prone homes swiftly,” it said. “But how can migrants quickly find another shelter that’s safe and where would they go to keep from the freezing cold in winter?”

The paper said the move is necessary to ensure public safety as it can ensure apartments in unlicensed buildings can’t be rented out.

“But we have to see the harsh truth that low-income, non-local residents who have migrated to find work from rural areas, seldom get the respect they deserve for making our cities better places to live,” it said. “Instead, they are more often viewed as a dispensable, even unwelcome group by many.”

The large wave of evictions are part of a 40-day campaign order by the Beijing municipal government to clampdown on buildings turned into residential homes without a license or those that violate the city fire code.

Photos and video clips of displaced migrant families left homeless and going from one neighborhood to another scrambling to find a new place to live are being circulated on social media. It has triggered an outpouring of support from individuals and NGOs offering temporary shelter and information on rental homes.

Zhang Hongxia, a rural migrant who lived in an apartment in the building next to the one damaged by the deadly fire, said she had to pay 200 yuan ($30) per night to stay in a hotel with her family after they were forced out of their home following the incident.

Unable to afford the hotel bill, the family took shelter in Zhang’s small fast-food shop. “We were sleeping on the floor until authorities ordered the closure of the shop in the city-wide curb on unsafe buildings,”she told Caixin. “It was so cold that I huddled with my daughter-in-law under the same quilt to keep myself warm,” she said.

Authorities cut the water and electricity supply to the shop on Friday night, Zhang said. This is a common tactic used by officials to evict people.

The family are now living in a friend’s home and looking for a new place to rent, Zhang said.

Xiao Xie, who works in Beijing as a full-time host of a livestreaming program about video games, said he had to spend one night in a friend’s minivan after being evicted. Xiao, who lived in the same building as Zhang, said his building was immediately sealed after the fire and that he was only allowed in later to pick up belongings.

Xiao says he has found a small five-square-meter room in a shared apartment and despite the problems he doesn’t want to return to his hometown in the eastern province of Shandong.

In the commentary, the state broadcaster CCTV urged the municipal government to abide by its motto of “patriotism, innovation, inclusiveness and moral righteousness.”

The rare challenge from the two national media outlets has put them on a collision course with local news organizations backed by the municipal authority such as the Beijing Daily, which have cheered the city government for “having done a good job.”

“The government has done a good job this time because many residents have been felt like they’ve been living next a volcano,” Beijing Daily said in a report Saturday citing a local who lives in a southern suburb where dozens of unlicensed buildings were sealed.

However, the newspaper failed to ask about who should be held to account over such unsafe buildings and their use as rental homes for many years before the fire and whether city authorities should help migrant workers with their relocation.