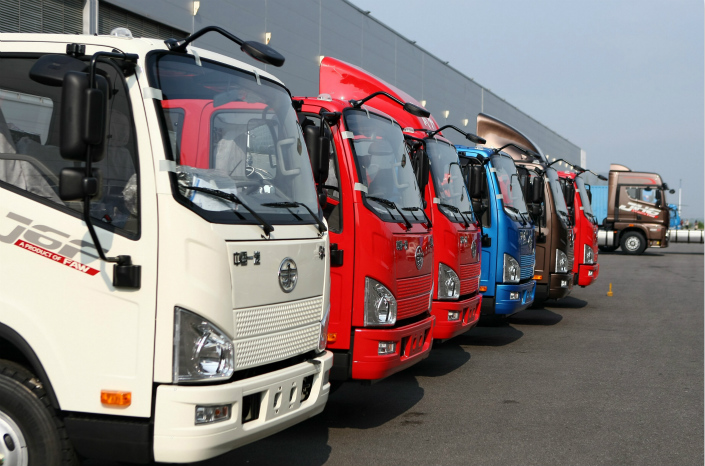 These online services, which allow truckers to find cargos using a smartphone app, have helped to eliminate independent contractors and delays as drivers no longer need to waste hours in parking lots in search of the next dispatch. Photo: Visual China

Wang Gang, an angel investor in car-hailing giant Didi Chuxing, has been tapped to become the chairman and CEO of the merged entity, the companies said in a joint statement. However, they didn’t reveal a timeline for the merger or any regulatory requirements that need to be met before the deal goes through.

The merger follows years of bitter rivalry between the pair with Huochebang once being accused of stealing shipment information from Yunmanman, and Yunmanman allegedly harassing Huochebang drivers. Wang is an outsider to both companies.

“The wisdom and trust between the boards of both companies made this merger possible, as we realize cooperation is more productive than competition” said Wang.

Yunmanman and Huochebang will continue to operate independently after merging, but data will be shared to improve efficiency, he added.

These online services, which allow truckers to find cargos using a smartphone app, have boomed in China in recent years. They have helped to eliminate independent contractors and delays as drivers no longer need to waste hours in parking lots in search of the next dispatch.

The merger between Yunmanman and Huochebang is the latest example of consolidation in China’s competitive technology-driven services arena. In August, Didi Chuxing confirmed plans to merge with its major rival Uber China.

Both Yunmanman and Huochebang are yet to turn a profit. The two companies have been trying to diversify their income streams in the past, but without any notable success. But they hope the merger, which will allow them to consolidate their massive databases, could help roll out other services including truck maintenance or even financial products for logistics companies.