Mobike, Ofo Reportedly May Be Forced to Merge Into Same Lane 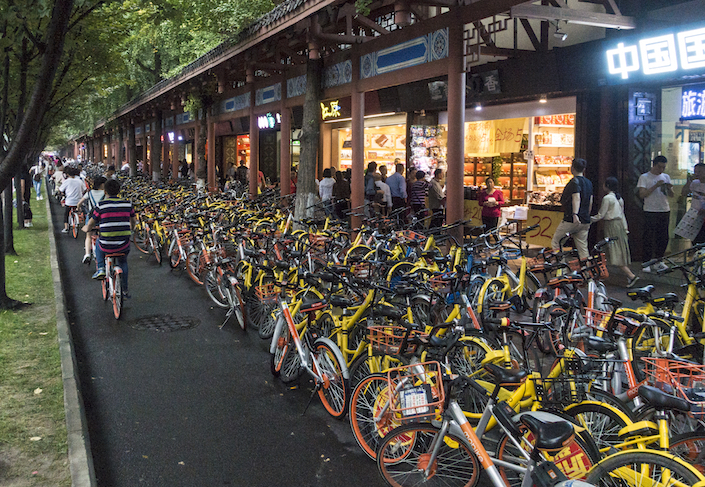 A merger of bike-sharing giants Mobike and Ofo, whose respective orange and yellow bicycles litter the streets of many parts of China, such as the southwestern city of Chengdu (pictured), would create a company likely valued at more than $4 billion, Bloomberg reported. Photo IC

Investors behind China’s two largest bike-sharing firms, which have received more than $2.5 billion in investment, are in early-stage talks to force a merger amid costly competition between the pair, Bloomberg reported.

The discussions between investors of Beijing Mobike Technology Co. Ltd. and those of its major rival, Ofo, are in a preliminary stage, and may not be consummated, Bloomberg reported, citing people familiar with the matter.

An Ofo spokesman declined to comment, while Mobike said in a statement it is not contemplating a merger, Bloomberg said.

Around a year and a half ago, both Mobike and Ofo launched the first batch of shared bikes in Shanghai, allowing users, after paying a deposit, to unlock a bike via a smartphone app and park the two-wheeler essentially anywhere on a sidewalk or public space. The service costs around 0.5 yuan (7.3 U.S. cents) to 1 yuan per hour and is often discounted or free as companies attempt to attract cyclists.

In an emerging industry, companies compete for market share, battling for a user base, and burn through cash to offer better services and larger discounts, Wu Dong, a professor at Zhejiang University’s School of Management, previously told Caixin. Wu studies innovation, startups and business strategy.

Mobike and Ofo often hold “ride for free” periods — frequently on the same day — and frequently hand out small cash transfers and coupons.

Mobike and Ofo are temporarily operating on ample financial support of more than $2.5 billion from investors such as Tencent, Bertelsmann and Sequoia Capital, which backed Mobike. Ofo investors include Ant Financial, Coatue Management and Didi Chuxing.

The move to create a single dominant player would follow a similar pattern for other emerging high-tech industries in China, where cutthroat competition often emerges among startups armed with hundreds of millions of dollars in cash from investors eager to tap the rapidly growing China market.

One example was the car-hailing industry, which experienced fierce initial competition but is now dominated by Didi Chuxing, which has swallowed its rivals Kuaidi and Uber China.

Similarly, the bike-sharing industry will eventually head toward a monopoly, Wu predicted.

Investors in Mobike and Ofo are currently looking at issues such as how equity would be split between them in a merged company, Bloomberg reported.